This is the second day in a row we have been working on upgrading the Tajmahal website. With the able help of webmaster Ken and many others we are finally there. www.tajmahalguesthouse.com Here is a great shot of geek central. The Taj’s Bamboo bar where we hang out most evenings with our laptops listening to Soma FM and sometimes chatting about the stories we email each other from a foot or two away. 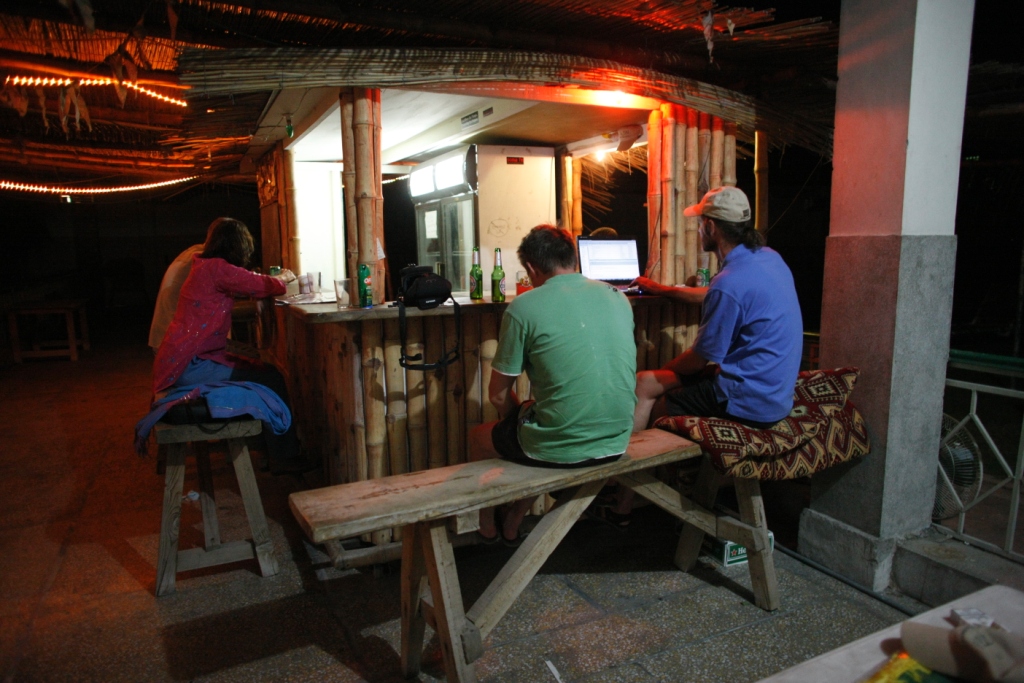 The services and security section of the website is pretty good so I’m posting it here too for the edification of my readership.

Taj Tours provides the opportunity for our clients to visit areas, sites, or people of interest in Afghanistan. We provide the vehicles, armed escort, secure accommodations, interpreters and fixers to facilitate business and /or sightseeing in Afghanistan, Pakistan, or the Khyber Agency. Destinations throughout most of Afghanistan do not require elaborate security measures, but we can provide the appropriate force protection package for any destination in the country. The table covers trips we have taken in the past we are available for any trip in our region.

*From the Tajmahal Guesthouse in Jalalabad

Taj Tours leverages the associations we have made during the years we have lived and worked in Afghanistan to provide our clients with effective, sensible, cost efficient solutions. We are an inherently outside the wire business and developed extensive contacts throughout the country living and working amongst the Afghan people. We can provide the security, local knowledge, and the access to meet any client’s needs. Most importantly we can tailor the level of support to match your needs so you do not waste valuable time and money in country.

The security situation in Afghanistan continues to deteriorate and is not expected to improve any time soon. Despite this most of the country remains low threat and open to international visitors. Armed criminality is always a concern and it is therefore wise to take armed security when traveling outside Kabul.

In the areas of Afghanistan where the likelihood of attack by improvised explosive device (IED) is high the most dangerous vehicle you can travel in is a large American made B6 or higher armored vehicle. This may sound counterintuitive but it is true. The safest way to move around contested areas is with a mix of armored and unarmored low profile vehicles. Armed opposition groups (AOG) target both international and Afghan security forces as well as international and Afghan reconstruction workers. High profile vehicles in convoy formation are easy targets. The only reason that casualties amongst the non military internationals are not higher here is due more to the inability of AOG groups to construct and deploy powerful IED’s than the protection provided by B6 armored vehicles. When the AOG do build and deploy effective IED’s, they routinely destroy not only B6 armored vehicles but ISAF infantry fighting vehicles and tanks too.

Technology is not a smart answer when faced by a human adversary who can counter every leap in anti IED technology with a simple shift in technique or procedure. AOG fighters deploy IED’s large enough to disable tanks. This is what they do to the armored SUV’s; 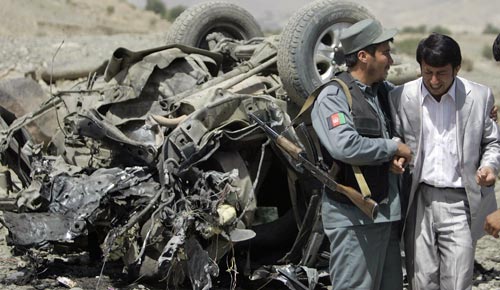 Going completely unarmored and high profile is the most dangerous way to travel. In August of 2008 three North American women from Rescue International were killed when a car load of AOG pulled alongside their marked, unarmored, high profile SUV and shot them from point blank range. The Japanese NGO Peshawar kai lost one of their international engineers to a Taliban kidnapping team in August of 2008. In both these cases the NGO’s were counting on the local population’s acceptance and support as their security plan. Hope is not a good security plan in the contested regions of this country.

Wearing local clothes, riding in a low profile armored vehicle with a combination of high caliber expatriate and local armed security operatives is the safest mode of travel. The quote below is from a story about a British Officer who served in Waziristan in the 1940’s.

Although improvised explosive devices did not exist in Leeson’s day,
ambushes of British convoys were frequent. When he did travel, it was in an anonymous red lorry and he wore local dress.

Extract from a Sunday Times profile Frank Leeson the last surviving British officer to have served in Waziristan in the late 1940’s.

What was true back in the 1940’s is true today large high profile convoys invite attack. If you require escort through contested areas Taj Tours and the security consultants from FreeRange International can provide you with escort packages custom designed to meet your need and expense account.

Case Study: In December 2006 there were growing concerns in Kabul about the availability of wheat in the western provinces. FreeRange International tailored a package that allowed a rapid assessment with a limited foot print. Our solution was one expatriate, four Afghan security guards, two vehicles and two drivers. 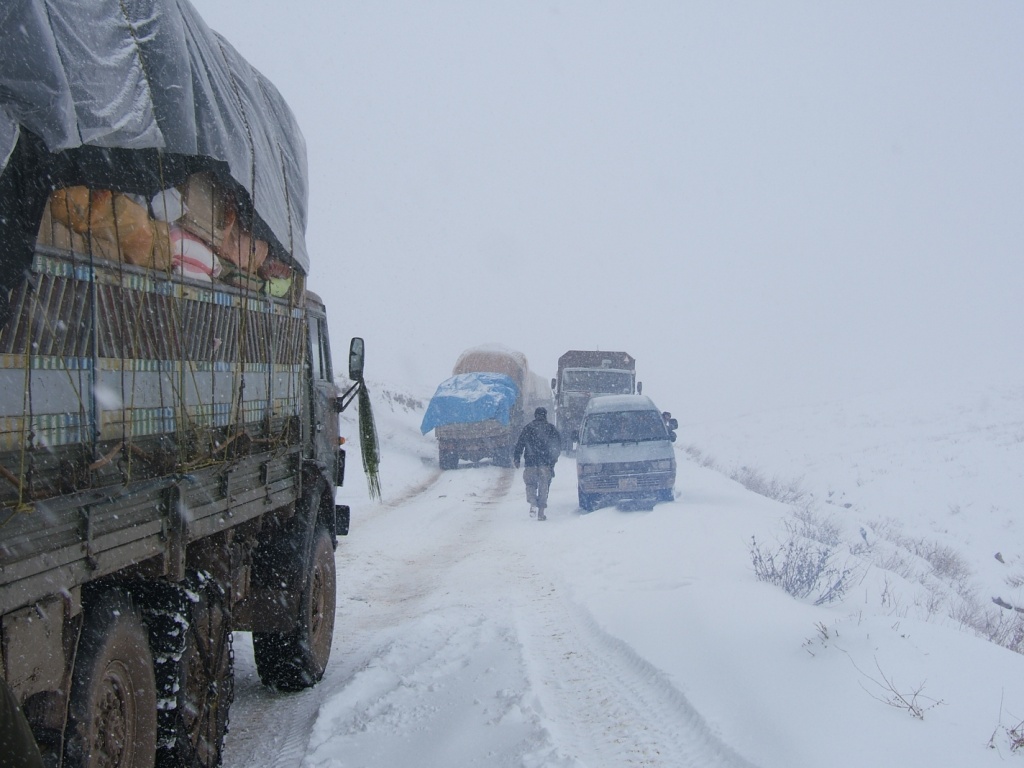 This is how most roads in Afghanistan look during the winter months and we were out for 16 days. Traveling by road from Kabul to Herat and then onto both Badghis and Ghor Provinces we were able to accurately report on availability and price of wheat throughout the region. 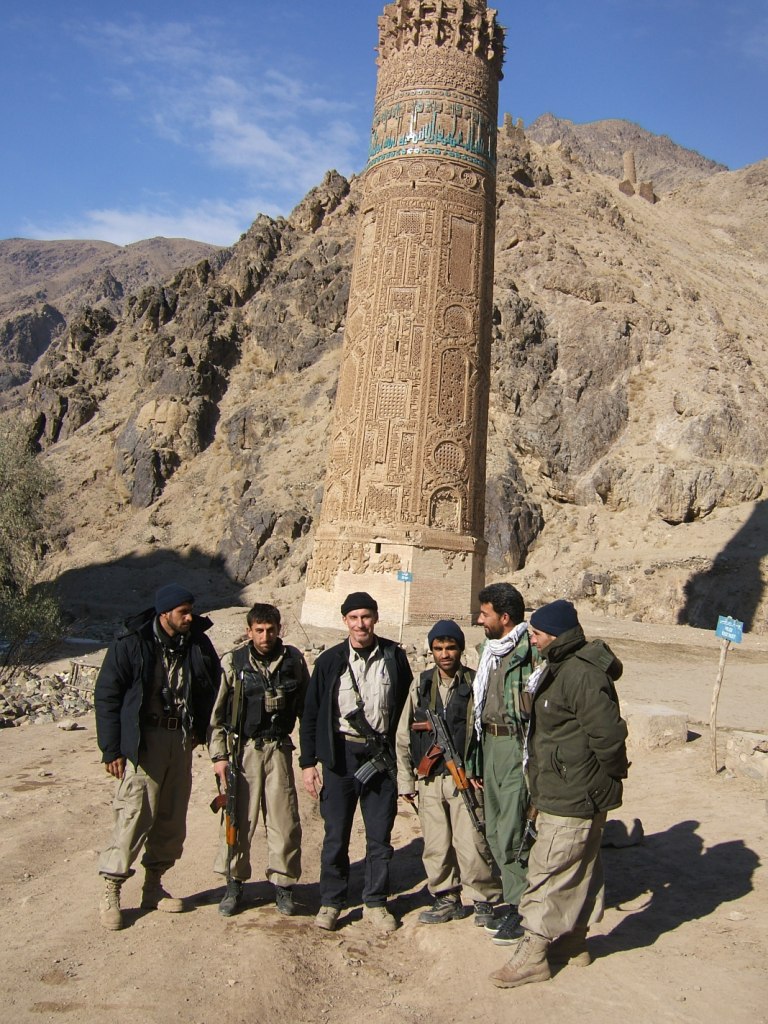 The 65m-tall Minaret of Jam dates back to the 12th century located in the heart of Ghor Province. It takes at least 10 hours of driving down a dirt track to reach this famous site.

Case Study: In the summer of 2007 an international construction company needed an area certified as de-mined immediately in order to resume construction in the dangerous capitol of the Helmand Province Lashka Ghar. They needed an explosive detection canine team and they needed it fast. In less than 24 hours FreeRange International was on the move transporting the K9 team, kennel, and equipment down the dangerous ring road from Kabul. We used two unarmored local SUV’s with Afghan security guards from Sediqi International and two armed expatriate operatives in a low profile, armored 2004 Toyota Hi Lux 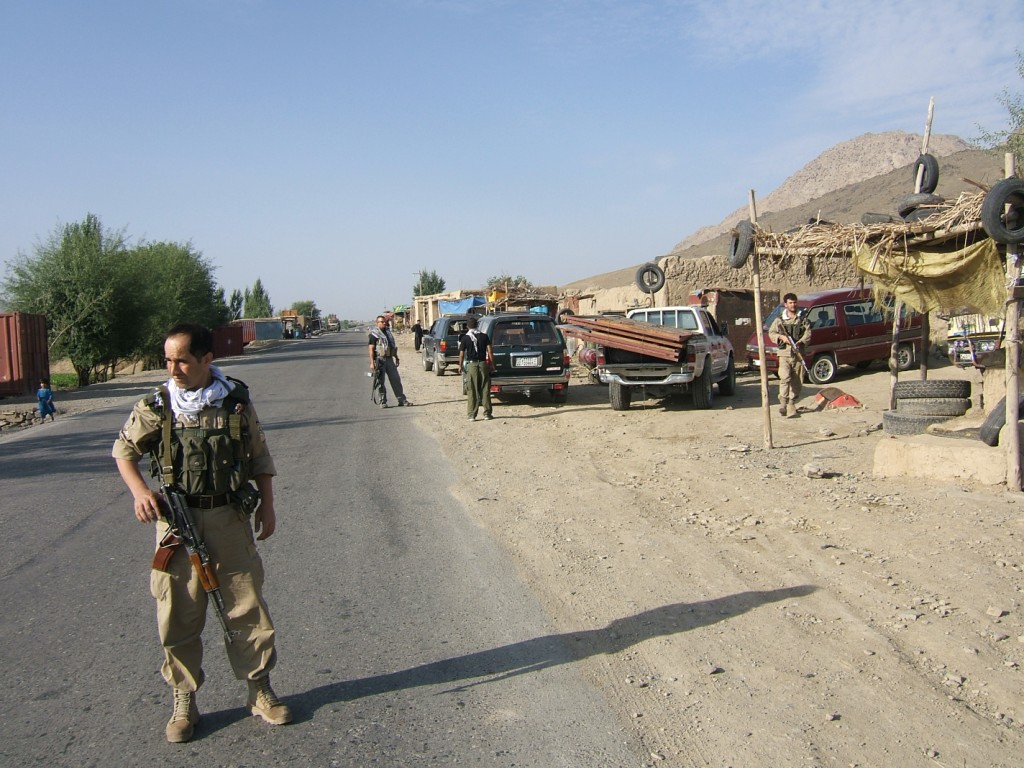 FreeRange International at work; security operatives fan out to establish security during an unscheduled stop in Shah Joy on the Kabul to Khandahar road. The two unarmored SUV’s contained heavily armed Afghan security guards from Sediqi Services International, the white pickup with the kennel in the back is actually armored (level B6) but as can be seen remains very low profile.

Case Study: In the spring of 2008 a senior international diplomat requested escort for a road movement from Kabul to Islamabad. He was required to use an armored SUV by his government so we placed an expatriate close protection operative in the vehicle with him and added two escort trucks from Sediqi Security. At the Torkham border our international operative continued the journey unarmed, due to the senior status of our client we had a large escort from the Khyber Rifles from the Torkham Border to Islamabad. 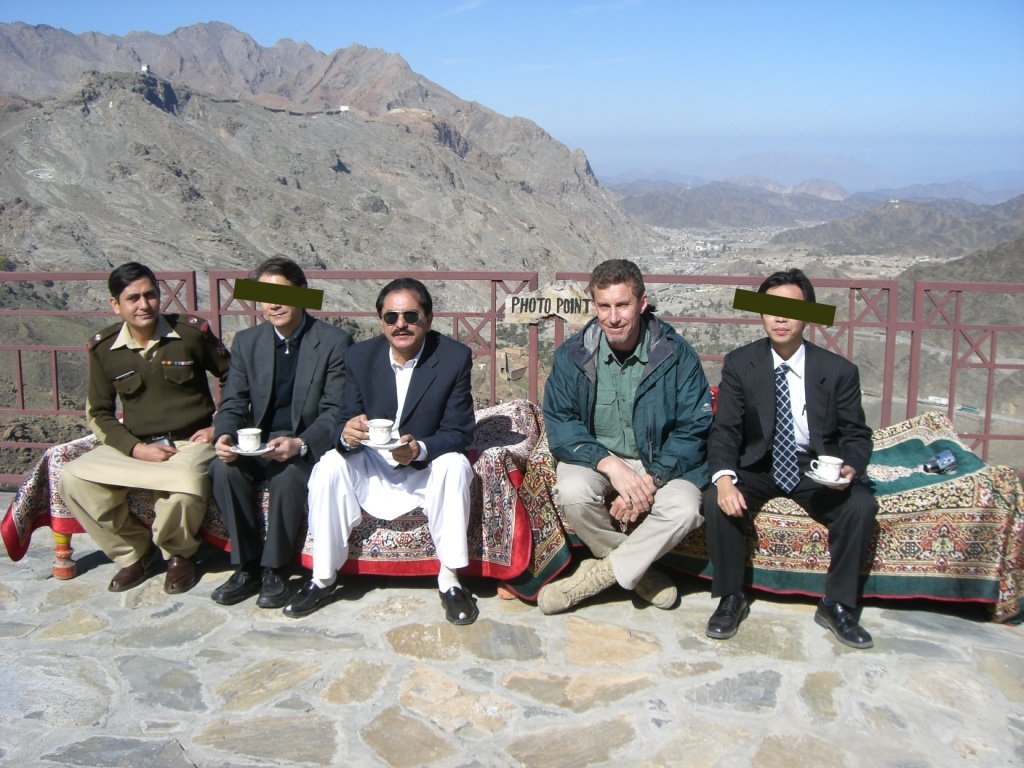 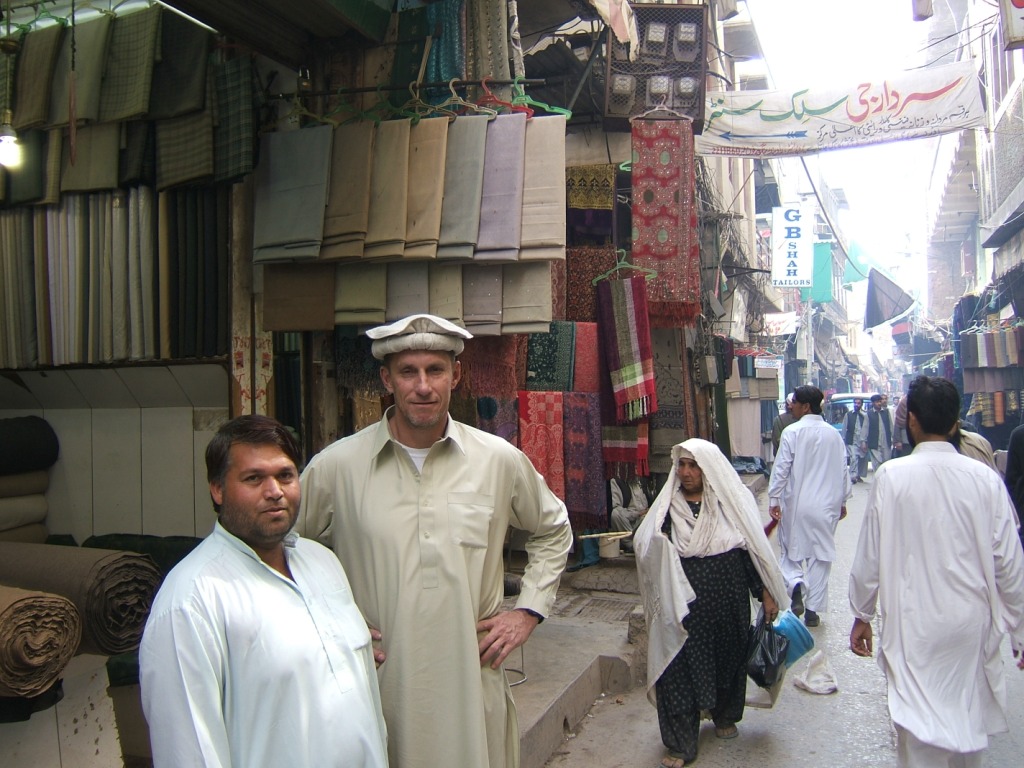