It has been seven years since the events of 9/11. The war of terror or the Long War which is a better term is the reason I am here. I’m in Jalalabad Afghanistan where I’ve been living for the past year. I spent a few years living in Kabul and free ranging the country having found a reason to visit every province in Afghanistan. I’m a security contractor; outside the wire type and the crew I run with use low profile, local vehicles and are very good at talking their way past checkpoints.

The security contracting business in Afghanistan is tough. The American firms Blackwater, and DynCorp have all the good paying DoD and DoS contracts locked up and the rest of the market here consists of British PSC’s and a growing number of Afghan companies who employ Expats. Tight competition for lucrative reconstruction work drove the compensation rates into the basement.

Our State Department and US AID have established ridiculously heavy security standards that far exceed the UN MOSS (minimum operational security standard.) These stringent standards slow projects and drain millions from building infrastructure to paying for fleets of armored vehicles and large secure compounds. Other donor countries abide by the UN standards and their operating costs are a fraction of what the US spends on security and life support for their Aid implementers.

Tonight I am sitting behind the bar of the world famous Tajmahal Guesthouse (Taj) of Jalalabad. Check out the high speed hat; 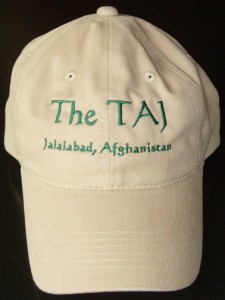 Today we had a very pleasant surprise. They guys from LaRue Tactical in Texas sent us some candy, cool hats, and Dillo Dust which we immediately put to good use on our meat pie. Our cook Khan has been pissing and moaning about cooking during Ramadan and came up with a dozen very crappy meat pies and then took off for his home village to prepare for Eid. We were getting ready to go buy some chickens to cook up but tried dillo dusting the meat pies. It’s Thurday night which is the night the Tiki Bar hosts all the NGO folks and who wants to fuss with dressing out a skinny chicken during happy hour?

So it is Poppy Eradication Program Bob’s birthday tonight. He’s former Army SF and loves to sing all the old crappy high rotation FM hair band songs from his misspent youth. His singing is horrible but he’s a “good bloke” in contractor speak so we tolerate the noise with grace and humor.

It is about 2200 here now and we have the usual mix of European NGO, American NGO and a sprinkling of outside the wire security types. Outside the wire guys are the ones who live in villas with the population where most of our military should be but is not.

The price we are paying for not having enough troops outside the wire is increased instability and more and more Taliban attacks. It is not yet a problem in Jbad city but the Jalalabad to Kabul road which is essential to the ISAF and US supply efforts and also for our weekly booze runs has been hit with all sorts of ambushes this summer. We go out to look at most of them in order to get a handle on just how bad the attacks are getting and the tactics they are using.

Here is a photo of the whole team from this summer when we were fortunate enough to have Amy Sun a PhD grad student from MIT who is a no kidding missile engineer. She was pretty sharp about figuring out what happened from the forensics and amount of fuel left in the tankers. She wasn’t bad at reading bullet and RPG strikes too in fact she was smarter about all this than we are which was annoying but handy. 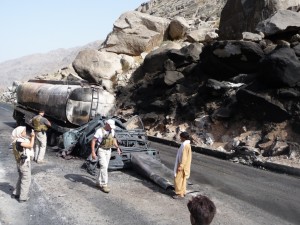 Here we are checking out an ANP checkpost that claimed they were attacked and repulsed a force of 30 Taliban expending all their ammo in the process. Did you know 7.62×39 mm ammo (Ak 47 bullets) sells for in Afghanistan? 75 cents round. We suspect that most of these “attacks” are really done to cover ammo sales on the black market. The Taliban humping in over the mountains are not doing so with 800 rounds of ball (that is grunt speak for full metal jacket rifle bullets) on their backs. 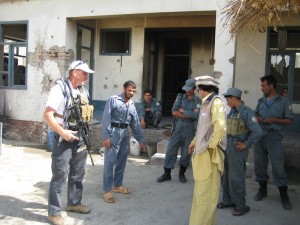 So it is 7 years since 9/11 and I have been out here for almost four of them. We work for the Japan International Cooperation Agency . Unlike US AID the JICA people work in the countryside or in Kabul with their Afghan counterparts. Every yen the Japanese people send here to help the Afghans gets spent exactly as it is supposed to because the Japanese JICA staff is in the offices with the Afghans ensuring they know where every yen goes. We’d be in much better shape if US AID did the same.

This will be a long war which my children will fight, if they chose to serve, and their children will too. There is no way to understand this place or fight effectively here unless you understand the people and their culture. Eventually we have to figure out how to keep more people like me in country for long duration so that they too know how to operate in the tribal districts. I havbe lots of ideas on how to do that which I will share in future posts.