Fridays are always laid back as it is the one day off we get each week. We had our normal compliment of French and German aid workers come by for drinks and a dip in the pool. 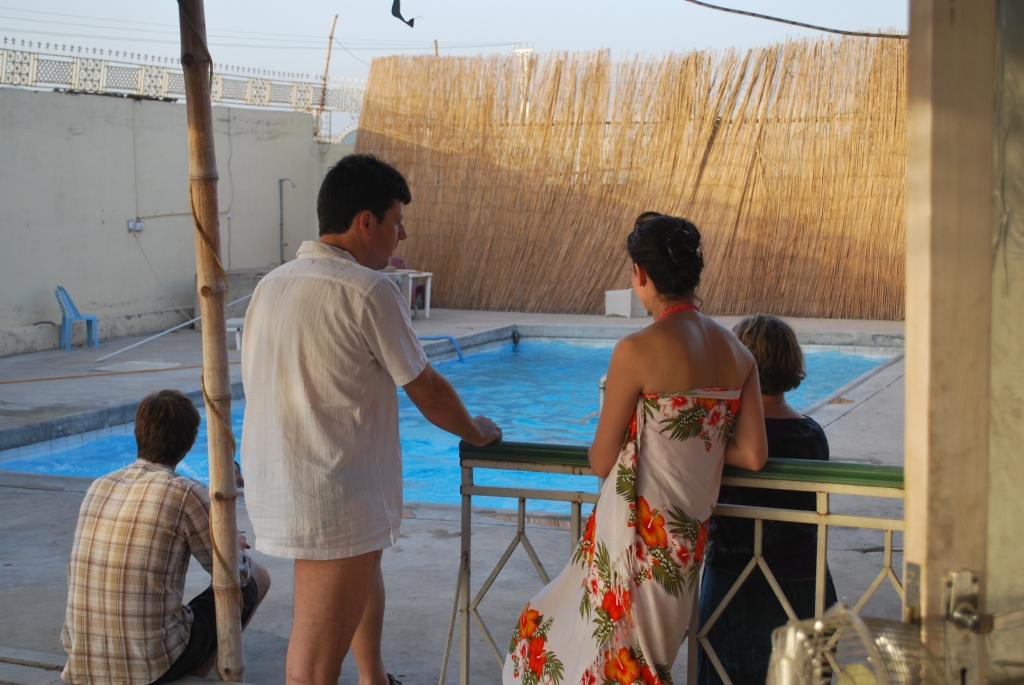 If you can’t tell my French friend Pierre is in flagrant violation of the Taj no Speedo rule. Every time we try to explain the rule to him he pretends not to understand us. But he and his crew are great folks who pay in Euros which makes them especially popular with me so we let him slide on the speedo thing.

The interesting tidbit of the day comes from the lady all to way in the right. She is German, works for GIZ and asked for our assessment of the attack last night on the Dih Bala district center which is 300 meters away from one of her offices. Like many IGO workers she has a high tolerance for risk. She has been here a long time, knows Dih Bala and the surrounding area well and is completely freaked out because there have been no problems with Taliban before.

Dih Bala is about 10 miles to the east of us and the home of many large clans of Brigands. They never molest the NGO’s or IGO’s as reconstruction makes it easier for them to smuggle stuff across the frontier which is how they have earned their living for the past 2 to 3 thousand years. The Governor of Nangarhar Province has successfully eliminated the cultivation opium poppy in the area but there are still tons of the stuff here because of the smuggling expertise of peoples like those in the Dih Bala district. So the fact that Taliban (armed criminal gangs do not attack district centers) is reportedly active and attacking the district center means something.

It could be the elders posturing with weapons to get the governors attention. The Governor, Gul Agha Sherzai, is from Khandahar Province and the local tribal chiefs have a tenuous working relationship with him. One way to get the attention and a little love from the big man is to have your district center attacked and then say you drove the bad guys out when the Afghan Army arrives to investigate. Or it could be the Taliban has moved into the district and that is always bad news for the elders. The Taliban normally removes the local power structure in order to dominate an area. Removal could be in the form of a pledge not to interfere with Taliban efforts to assassination. If the Taliban are not strong enough or if they miscalculate when dealing with certain elders the villagers will grab their rifles and fight. Intimidation of an armed population is a dangerous game – the Taliban screw it up sometimes.

Our assessment of Din Bala district is that the Taliban are back and strong enough to challenge the central government for the district center. Our German friend agreed which is a bitter thing for her to do because with the Taliban back her work here is at an end.

As the security situation continues to deteriorate we have been making it point to look at every tanker and police check post attacked by the Taliban.

The tanker pictured above was attacked from across the river and took a good 60 to 70 rounds into the cab and front right aspect. It also took an RPG round into the cab. The RPG shot was either beginners luck or we have one hell of a pro RPG gunner working the area. The closest probable ambush site is 400 meters away and 200 meters above the truck.

The tanker pictured above had 10 bullet and one RPG hit; all the rounds came in from the left rear or road side of the river. There are ANP checkposts 500 meters behind us and 500 meters to the front – it is impossible for an ambushing party to cross the river or set up on the side of the road without being detected.  All the Taliban attacks come from across the river and include enough firepower to fix the checkposts while they got after fuel tankers. That didn’t happen this time and there is also little fuel left in the tanker. Our guess is that it was emptied in Laghman Province and then shot up in exactly the same spot as the previous two Taliban attacks. The criminals were probably mounted in local vehicles, and they and driver escaped after paying off the cops. Just a guess but it is the simplest explanation.

Two trucks on the same road and attacked in almost the same spot and reported as Taliban attacks. This is why we spend so much time getting out and about.