Today the Bot and I had to run to Kabul for a re-up. We started our journey by striking a pose for our sponsor. Well not a real sponsor but they sent us some hats, bumper stickers, steak rub, and a generous assortment of candy so we feel sponsored. Here is Shem (a.k.a. Shem Bot a.k.a. Bot) and I at the start of the day with our signature La Rue Tactical hats. We’ll have to do this again as I have been told by the resident expert that this picture lacks technical merit due to failure to use proper lens filters.

The drive was smooth and fast. We rent SUV’s and switch them up frequently so we do not stand out on the road. We stop at all checkpoints and chat up the ANP (Afghan National Police) who appreciate that we speak some Pashto and are polite. In this country a little Pashto or Dari and a big smile will win you a ton of goodwill from the local officials and people.

The problem with traveling in low profile mode is running into an ISAF or American military convoy can cause drama. I was shot at by the American Army in downtown Kabul back in ’07 while driving a brand new Armored Land Cruiser with diplomatic plates identifying it as belonging to the Government of Japan. A rear gunner in a five truck convoy thought I got a little too close to them as they were exiting a traffic circle. I may well have strayed too close but it never occurred to me that the young trooper would not recognize a large brand new armored SUV as being on his side. The startled gunner unleashed a good 6 round burst into the hills above my truck (where about 3000 people live packed into squalid mud huts.) I was out of the drivers door and running down the road yelling at this idiot before I realized what I was doing. That startled the five hundred or so Afghan pedestrians who stopped and watched this unfold in utter amazement.

That was an embarrassing incident, getting too close to the convoy was sloppy on my part, getting shot at was bad, bolting out of the drivers door without even letting the vehicle stop was very bad but it elicited one of the more memorable quotes from my favorite Japanese client. He was a senior diplomat who I consider a great man and who I was very fond of and proud to work for. When I came back to the truck he looked at me shaking his head and muttering Tim san I do not understand how you people beat us. It is a funny story to tell now but it is also still a problem; our military is not learning how to operate here.

We were jamming up the Mahipar Pass passing a slow moving truck when up pops the American Army in MRAPs and the Bot swears the turret gunner has his pistol pointed at him. The kid did have his pistol out but as the more experienced professional I opined that the chances of him even hitting the car from up on top of that giant armored vehicle were remote. Plus the soldier was switched on and lowered his pistol once he saw we were expats. The Bot took no comfort from that and unleashed a torrent of invective (as us high-speed writers say) which seemed to calm him down.

Here are the guilty bastards (I say that in good humor mind you) as they moved further down the pass note the futility of attempting to keep all civilian traffic away from you which the military tries to do on all their convoys. Only once have I seen a convoy of obviously very experienced soldiers (French) who moved with the traffic and let the local vehicles get mixed in with their convoy. That is good solid thinking on their part. 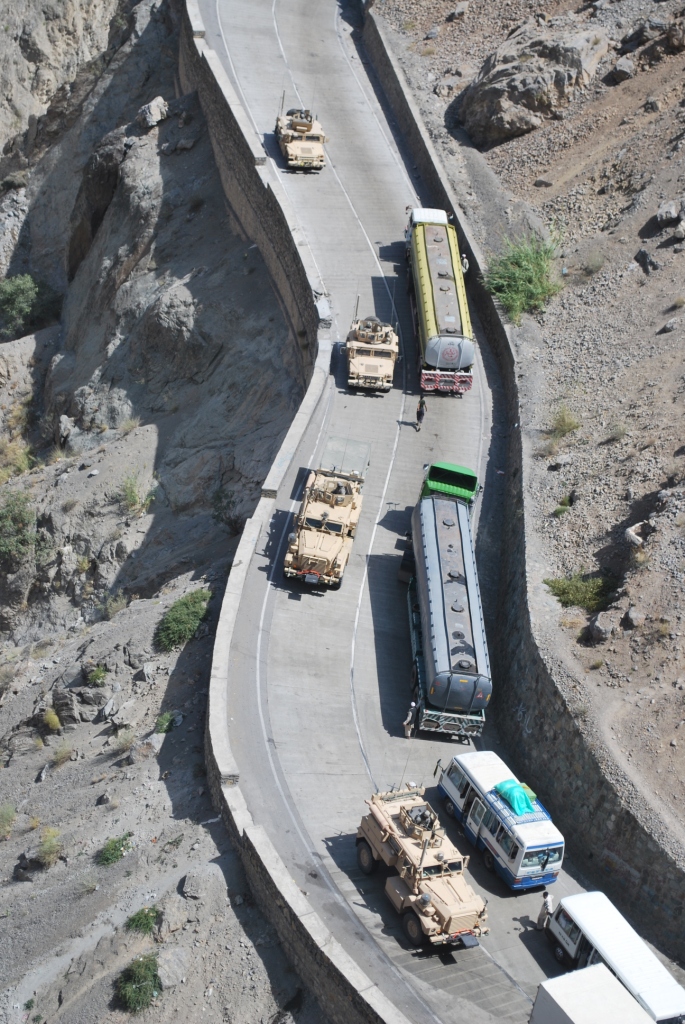 As you can probably tell the pass is a long series of hairpin switchbacks and one can always count on a old truck to be broken down and blocking one lane in the road. The fuel truck in this photo is broken down which is why the buses are stacked up behind it. I have spent hours sitting on the road here because a truck broke down and blocked one of the four tunnels. Here is a good shot of the Mahpair pass; 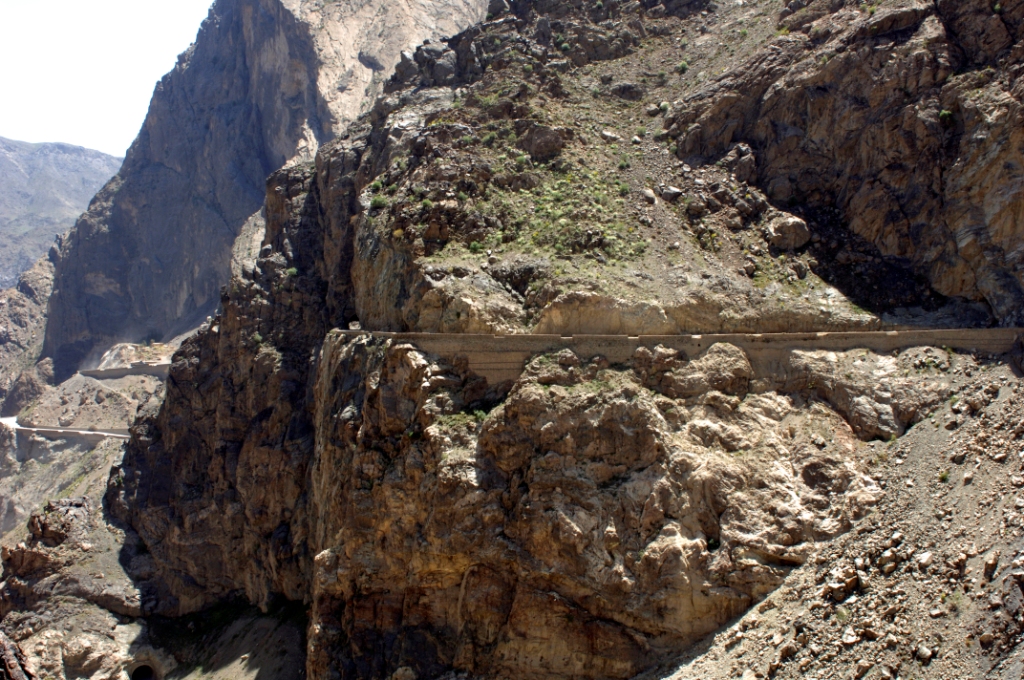 After that bit of minor excitement we were off to Kabul to shop for proper pasta, some seafood, beer, wine, and spirits. We hit our favorite Italian place for a proper sit down lunch and spent the next few hours running around Kabul sans body armor and long guns. The Kabul PD gets crappy with expats for having full kit while transiting the metropolitan area. That is fair enough Kabul – is not currently a place where you can expect any problems unless you are driving in American or ISAF armored vehicles. There is no real reason for body armor or long guns, they upset the local citizenry as well as the authorities, so we go with the concealed carry route.

Here is what the ole Haji ride looked like after our last stop in the greater Kabul area: 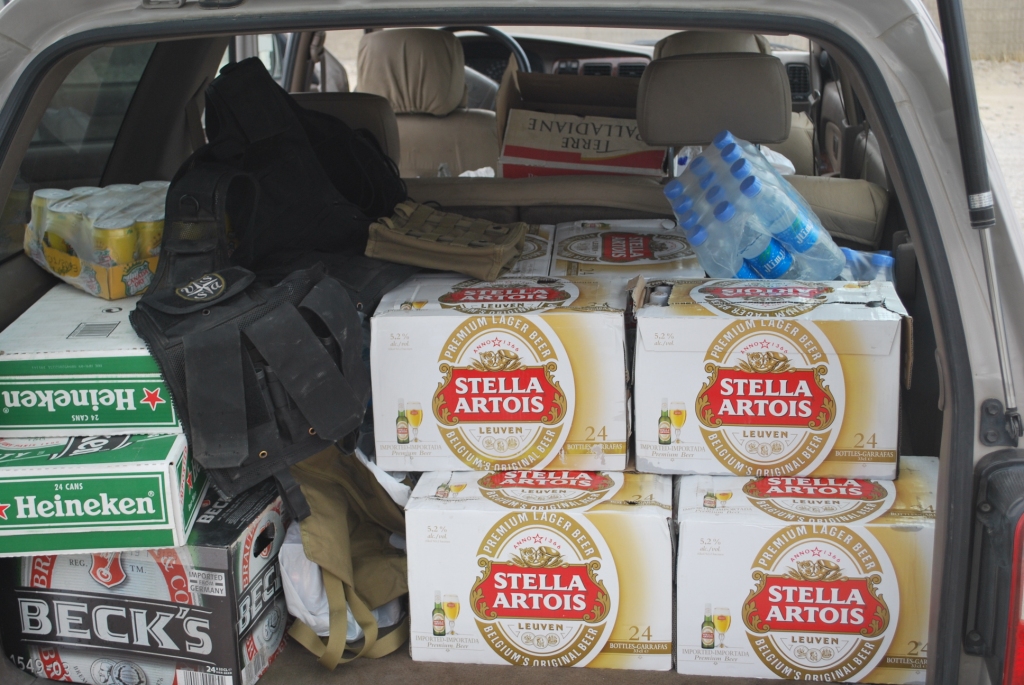 It was smooth sailing back to the Taj. We made it from Camp Warehouse to here in 85 minutes. There was little traffic on the road, no ISAF convoys thank god (they can double or triple your trip time and often jam up traffic for 5 to 10 miles behind them because they move so slow) and the weather was perfect. The Taj is now stocked and ready for the arrival of Baba Ken the leader of the Jbad geek squad. One of the wonders of the third world is the number of young men in these places who are scary proficient with computers.