Editors note: We are re-posting some of  our older material in preparation for another round of Free Ranging in Afghanistan

I’m back in my compound after attending a bunch of ceremonies in Zaranj marking the end of our efforts in Nimroz Province.When we flew in last week the skies were dark and it rained that night. The next morning was clear as a bell making for excellent photography and perfect weather for what turned out to be 15 hours of driving through the Dasht-e Margo (Desert of Death). Our mission that day was the dedication ceremony for the Charborjak Irrigation system which we had built, mostly with shovels, wheelbarrows and lots of man power, over the previous 11 months. We had originally scheduled the ceremony for the 5th of October but changed the date at the last minute. On the 5th there was an ambush waiting for us; when we moved out last Thursday we were a mobile ambush looking for anyone who was looking for us.

The Provincial Governor of Nimroz Province is Al Haji Karim Brahui and those of you who have read this blog know I’m a big fan of his. He’s a graduate of the Kabul Military Academy and served in the Afghan Army as an officer until the Soviets invaded. Governor Barahwi then became a Muj commander who fought the entire war without any help from the United States.  He was working out of Iran and obviously had a little help from them despite the fact that he is not too happy with Iran at the moment. The trip he took us on was remarkable because we did not go the way we have always gone to Cahrborjak; we jumped the Helmand and moved deep into the desert where the Governor wanted to show us something. This story is best told through pictures and I have around 1800 from that one drive alone. So stand by for a story told the Marine way – lots of pictures and no big words. 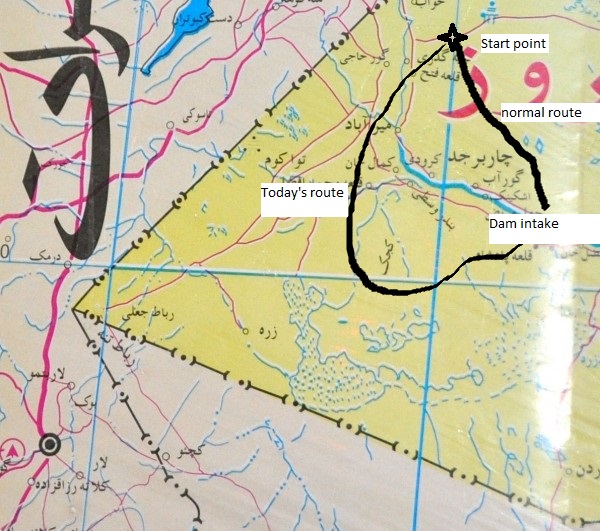 Along the way back to Zaranj we stopped at the village where Governor Barahwi was born and raised.  It was slightly bigger than this one. We also stopped at the village of the ANP soldier who was killed in the ambush last week. We did not take pictures in either place and we hung out in the village of the ANP soldier for a good hour or so too, paying respects as it were. It was a great day but my camera battery died after I took this picture so it is time for analysis and commentary.

The kerfuffle over the dam being built is an interesting contrast between two styles of doing the “build” part of the current Afghanistan plan.  There are direct implementer’s like us who take USAID money and use it according to the priorities of the Provincial and District governments.  We did not build anything new – we restored a check dam and a major irrigation intake that had been destroyed back in the 80’s. We used the same plans and the same engineers who built those irrigation systems back before the Soviets arrived and depopulated the rural areas of southwestern Afghanistan. The provincial irrigation department coordinated with their national level counterparts in Kabul on every step of this project and sent in regular progress reports. We also employed every man who could handle a shovel in the district for almost a year which is the whole point to cash for work programs.

The dozens of senior, highly credentialed people who reacted with emotion boarding on distress when they found out about this project are the other side of the coin. These are people who have been given a great deal of authority yet have no responsibility for tangible on-the-ground results. They never leave the FOB’s and never see anything of the country except what they can see while flying over it. There is a PhD hydrologist working for the USG and also coordinating with a British subject matter expert to come up with the Helmand Water Shed Master Plan. I am sure they are professionals who take their work seriously. But good intentions are meaningless and the hundreds of millions of dollars being spent to bring people like that to Afghanistan for a year of FOB life might as well be thrown into a rubbish bin.  Do they honestly think that when we leave here their “master plan” will be worth more than a cup of warm of spit?  How can smart people be so stupid?

The Helmand River Valley will never reach its full potential unless every farmers field is dug up, the clay removed, and the fields leveled which we tried to do in the 1960’s but the farmers got their guns out and refused to allow the bulldozers in. That was when Lashkar Gah was called “Little America” and the State Department was trying to salvage the disaster that was the original Hellmand River Valley project run by the engineering firm Morrison Knudsen. Since the completion of that project local farmers have irrigated their fields by flooding them. The NGO I work for tried to introduce drip irrigation to the local farmers years ago but they pulled the hoses out of the ground using them to tether sheep and goats. You cannot force change on Afghan farmers any easier than you can force change in Americas’ two-party political system. Proving that drip irrigation is efficient and works better turned out to be completely irrelevant; the Afghans are going to farm the way they farm and the way they farm wastes water.

Not that using less water is a big deal because, as any Afghan sod buster will tell you, that just means more water for the Iranians. Water is a zero sum game for Helmand Valley farmers; changing that mind set is not going to happen in my life time….or yours.

Last year Michael Yon visited our Nimroz projects and put up an interesting post called Please don’t forget us. He was writing about a massive women’s training program we ran that year because Zaranj has a more Persian culture, woman can drive in Zaranj, work outside the home and attend training courses without any problems. We tried to do an even bigger woman’s training program this year but we’re rejected by USAID. The woman had already been forgotten and this year’s crew in Kabul wanted “capacity building” which is the new buzzword from the geniuses at our State Department.  For 1/10th of the cost of keeping just one hydrologist in this country for a year, and I’m talking the million bucks of life support and security costs, not the salary or cost of mobilization which would easily add another million to the sum, for 1/10th of that we could have trained 300 woman and sent them on their way with the tools they needed (Sewing Machines, beauty salon equipment, wool and weaving boards etc..) to start their own business.

My Project Manager Bashir is now gone having moved on to bigger and better things.  I’m right behind him as my time living in Afghanistan is coming to an end. The people of Zaranj have already been forgotten by our political/media class and are now on their own.

We have no business foisting a “watershed master plan” on the Afghans – it’s their country, their river, and their breadbasket and when allowed to do so they will build things back to the way they were.  It may not be optimal, there may be inefficiencies in the system that a PhD hydrologist could fix (if she had freedom of movement and actually spent time on the river) but who cares? What is going to remain when we leave is an Afghan system, built by and for Afghans and to be honest, I have no idea why we think we should be bringing all these “subject matter experts” over here in the first place.  Who are we to dictate to them how to manage their own natural resources? We should send all the hydrologists back to America to aid in a gigantic shovel ready program I’d like to see started called “Get all our oil from Alaska and the Western States Project”. That’s where we should be spending 2 billion a week and we’d even see a return on our investment.  How strange would that be?