If I needed a sign to confirm my plan to return to Afghanistan was a sound one I need look no further than the coverage of yesterday’s MOAB bombing. It is clear that the usual ‘experts’ who comment on these types of events are clueless and that makes me wonder (yet again) just how much of the news we digest is factually correct.

The only Fox news show I’ll watch (occasionally) is Tucker Carlson but yesterday he struck out when he interviewed  an “army veteran” who claimed these tunnels were the same ones used by Osama bin Laden to escape in 2001. He then added some nonsense about the Haqqani group using them too before saying the MOAB was intended to “make ISIS fighters think twice about using such tunnels.” Everything the guy said was demonstrably wrong as is most of the reporting out today following up this story.

Osama bin Laden was trapped in the Tora Bora Complex in Khogyani district not the tunnel complex in Achin district which is at the head of the Mamand valley and the terminus for supply runs from across the border. It is also a training complex as well as a command and control node. ISIS has used this complex from day one because it is remote, easy to defend, fortified from back in the Mujaheddin days  and is a direct link (via donkey train) to the ISIS-K Pakistani homeland. 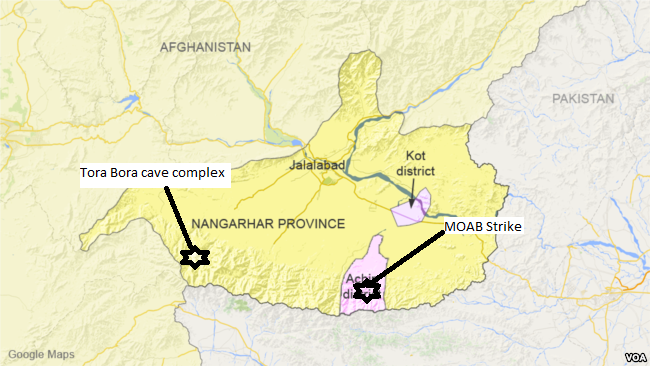 The MOAB will have a psychological impact on ISIS but that impact may or may not strengthen their resolve; it’s hard to say. What we do know is that militants in Afghanistan have been on the receiving end of unbelievable amounts of firepower for 16 years now and it does not appear to have affected their ability to replace casualties, motivate their fighters or stay in the fight.  ISIS can now claim that not even the “Mother of all Bombs” can hurt them and use the attack to drive recruiting through the roof. I don’t know how they’ll react and also know that nobody in the meida does either.

We do know that Islamic State of Khorasan (ISIS-K) is comprised mainly of former Tehrik-e Taleban Pakistan (TTP) militants from various tribal districts on the Pakistani side of the Durand Line. We also know they have been joined by Salafis from Kunar, Nuristan, Nangarhar and a number of other provinces.  What we don’t know (not that it matters) is how many militants were killed in the strike. The Independent Journal Review says over 100 people were killed based on a source who appears bogus to me, the Guardian says 36 were killed but doesn’t explain where that number comes from and the BBC is reporting dozens killed. All of these reports carry speculation about the number of civilians killed in the strike too which is something the press never speculated on when Obama was president but I digress.

The truth is we’ll never know how many were killed because their bodies are sealed inside the cave complex. That’s what 18,700 pounds of H6, (a mixture of RDX (Cyclotrimethylene trinitramine), TNT, and aluminum) delivered in an air-bust ordnance is designed to do. Were there non combatants present in the caves? There had to be a number of boys and old men who do the cooking, goat herding, water humping, firewood gathering and other housekeeping chores. But I wouldn’t call them noncombatants; young males and old men will always be co-located with Islamic terrorist fighters in the bush.

Weaponeering is the process of determining the quantity of a specific type of lethal or nonlethal weapons required to achieve a specific level of damage to a given target, considering target vulnerability, weapon effect, munitions delivery accuracy, damage criteria, probability of kill and weapon reliability. The  use of the GBU-43 MOAB yesterday was a weaponeering decision; nothing more. It may well have sent a message to other potential antagonists but was used because we wanted to destroy several metric tons of weapons and ammunition stored inside a cave complex.

There will be unintended consequences from the use of this weapon and one of them is this: the world just became a much safer place. I just finished an interesting book titled The Upcoming War With Russia, written by General Sir Richard Shirreff, the recently retired Deputy Supreme Allied Commander Europe (NATO). The book is an urgent warning from a senior commander about an impending conflict with Russia and takes place in May through July of 2017. It starts when the Russians seize the Baltic states because they are convinced NATO lacks the will and combat power to stop them. General Shirreff cities the problems we are currently facing regarding aircraft and combat unit readiness (they are at the worst levels of my lifetime and damn near as bad as 1949) as well as the attitudes of our current political leaders as the precipitating factor in Russia’s decision to initiate hostilities.

The purpose of his book was to alert the reader to a real, no shit, existential threat and he was spot on with one exception. He anticipated that Hillary Clinton would win the election and American foreign policy would remain as fickle as it had been under Obama. The sales of his book will now plummet because in one bold move President Trump removed the greatest enticement to World War III and thus the purpose of the book.  America has returned as a legitimate counterweight to any nation seeking to overthrow the current status quo. We are leading from the front again and tolerating no shenanigans.

But just because we are great again doesn’t mean things are going to go smoothly from this point forward. We are in a real sticky situation in Afghanistan and if we do not radically change the approach we are taking there we’ll never leave, never make the place better, never stop the fighting and never stop the dying. The Marine deployment to Helmand province this spring is the first attempt by the United States  military to try something a little different. That deployment needs to be covered by somebody who knows what he is seeing and can understand context as well as the big picture.

You’ve got me to do that but I need you to help get me over there and in position to report. Please take the time to visit the Baba Tim Go Fund Me Page and support independent, honest, competent reporting from the front lines.

3 Replies to “MOAB Madness; The Media Gets It Wrong Again”