Last night England experienced another terrorist attack; this time a suicide bomber who targeted a large crowd of young concert goers in Manchester. The media has focused on the targets being children which is curious. There have been thousands of children beaten, raped and brutalized by Muslim (mainly Pakistani) grooming gangs for years in England without a peep from the British media. In fact, the most recent grooming gang scandal happened right outside Manchester in the hamlet of Roachdale. That not one person in England has been held to account for those crimes against humanity speaks to how dismal life must be for white British female teens who belong to the lower classes.

Political leaders from Berlin to LA have sent the reassuring message that they “stand with the people of Manchester“. That’s great; let’s add the colored lights and social media UK flag filters and it will no doubt help. Right?

The response in the UK is predictable kabuki theater. They have dispatched 5000 soldiers into the streets to replace the police who are busy rounding up the usual suspects. The usual suspect the police round up after terrorist attacks are British citizens who have posted remarks critical of Islam on their social media accounts.

The British press has, as usual jumped on the prospect of a wave of anti-Muslim attacks to warn their fellow citizens not to do what, to date, they have never done. Newsweek immediately jumped on that band wagon too with this article stating that:

In December 2016,  the Muslim Council of Britain urged British politicians to urgently address Islamophobia in the face of growing attacks against Muslims in the U.K. Figures released in October 2016 showed that hate crimes against Muslims in London had increased 65 percent on the previous year.

If you go to the link about this 65% increase you’ll find a BBC article that states that there was a 65% increase and nothing more than that. What are these hate crimes? The BBC doesn’t say and I suspect they are social media posts like the one pasted above and nothing more. Are Muslim women wearing the hijab being hassled in the streets? That would be bad but not as bad as being tortured, sodomized, raped and forced into prostitution; a fate that has befallen thousands of white girls in England while the authorities turned a blind eye.

There are going to be more of these attacks, they will increase in severity and there is nothing any of us can do to stop them. In Europe the ruling classes refuse to define the problem as Islamic Terrorism which was true in America too until President Trump was elected. When the President recommended a prudent course of action; temporarily suspending visa’s from seven countries known to export Islamic terrorism until we could find a better way to vet visa applicants, the liberal press and their adjuncts in the Democratic party erupted in outrage at what they claim to be racism and ‘Islamophobia’ whatever the hell that means. 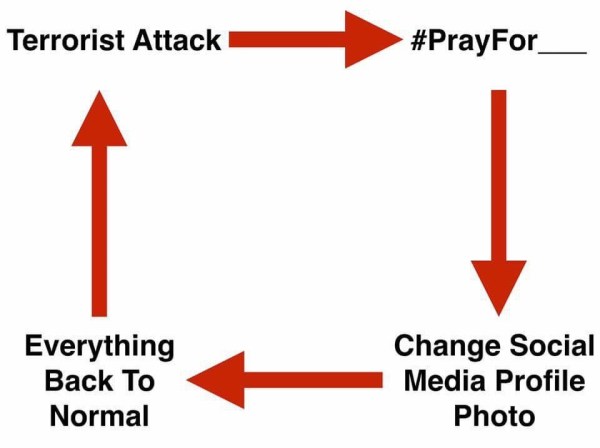 Islam is a religion that has adherents from every ethnic group in the world. They come in all shapes, sizes and colors which would preclude allegations of racism one would think. But our leaders don’t think and in the name of liberal progressive virtue they will refuse to adapt any common sense measure to protect their citizens. That dynamic will not change no matter how many more of their citizens are massacred by bombs, guns, trucks and the sword.

What our leaders will do is to continue restricting our freedoms and forcing group punishments, like the American TSA screenings at airports, which accomplish nothing other than harassing the traveling public.  They will close the barn door after the cows have fled by deploying troops into the streets as if that will accomplish a damn thing.

Where is this leading us? As he has so often done in the past Richard Fernandez, blogging at the Belmont Club, lays it out for us. I’ll give him the last word.

Government is losing its credibility as an effective protector.  Under these circumstances “carrying on exactly as before” is likely to have a meaning opposite to Independent’s intention.  For most people it will mean continuing to batten down the hatches and rebuilding the trust networks so foolishly discarded when they put their trust in the State. The vision of future may prove to be not the borderless EU after all — but Israel.  If government fails to protect people they are likely to fall back on tribalism and wire instead….

If we are to prevent a new medievalism finding the right balance between an open society and maintaining loyalty and allegiance is necessary.  It is a difficult task under any circumstances.  But rarely has anyone failed more dismally at it than the leaders of our multi-culti world.  By stigmatizing calls for reasonable loyalty as bigotry they have climbed out on a limb and sawed themselves off; by their dogmatic insistence on mindless inclusion they’ve foreclosed all attempts to bring things back to even keel.  They have reduced themselves to the level of hapless bystanders, unable to either prevent or explain an onslaught they themselves — were they honest enough to admit it — should have foreseen.

2 Replies to “Carry On – The New Normal”