Last week I read an article about a topic that, like many current counter narrative trends, has been covered extensively in the alt media while mostly ignored in the legacy media. That topic is the epidemic of rapes and sexual assault committed in Europe by Islamic migrants. The author, Dr Cheryl Benard, revealed something I didn’t know and that is a vast majority of these rapes were being committed by Afghans. She was focused on Austria because that is, apparently, a country she knows well. Her observations may not be applicable in countries like Sweden but that fact is irrelevant to her overall thesis. She, like me, has extensive experience working with Afghans and she was appalled by the facts she was reporting.

The article, I’ve Worked with Refugees for Decades. Europe’s Afghan Crime Wave is Mind-Boggling is worth reading in it’s entirety.  From the linked article:

I have worked on issues related to refugees for much of my professional life, from the Pakistani camps during the Soviet occupation of Afghanistan to Yemen, Sudan, Thailand, Ethiopia, Djibouti, Lebanon, Bosnia, Nicaragua and Iraq, and have deep sympathy for their plight. But nowhere had I encountered a phenomenon like this one. I had seen refugees trapped in circumstances that made them vulnerable to rape, by camp guards or soldiers. But for refugees to become perpetrators of this crime in the place that had given them asylum? That was something new. Further, my personal and professional life has endowed me with many Afghan and Afghan American friends, and there is nothing collectively psychopathic about them. They are doctors, shopkeepers, owners of Japanese restaurants, airport sedan drivers, entrepreneurs, IT experts, salesladies at Macy’s—they’re like everyone else. The parent generation tends to be a bit stiff, formal and etiquette conscious. It is impossible to imagine any of them engaging in the sort of outlandish, bizarre and primitive sexual aggression their young compatriots are becoming infamous for. Yet here we are.

Dr. Benard puts forth several hypothesis about the origins of this behavior and then promptly dismisses them with observations that I believe are true. One is Afghan men are not accustomed to strong drink which is, to those of us who know the land, nonsense. Not all Afghan men drink alcohol but most do and those who don’t imbibe in Afghanistan are not likely  going to drink outside of Afghanistan.  Poor impulse control when stimulated by young western women in revealing clothes is also dismissed. The victims are not all young, scantily dressed or, for that matter, women.

She concludes her review of potential causation with this paragraph:

Which brings me to a final theory being vented in Austria: that these destructive, crazed young men are being intentionally infiltrated into western Europe to wreak havoc: to take away the freedom and security of women; change patterns of behavior; deepen the rifts between liberals, who continue to defend and find excuses, and a right wing that calls for harsh measures and violent responses; to inflict high costs and aggravation on courts and judicial systems and generally make a mess of things.

She doesn’t seem to believe this theory either and on this point we are in agreement. The point of her article was to make recommendations on what should be done. Her recommendations are sound but probably wasted on European elites who appear adverse to common sense and (again apparently) are insulated from the consequences of their virtue signalling behavior.

This article was deeply disturbing to me as it in no way reflects my experience dealing with Afghans. As I pondered the implications I remembered a remarkable conversation I had with a senior Imam from the Afghan Ulmea when I first arrived in Kabul. 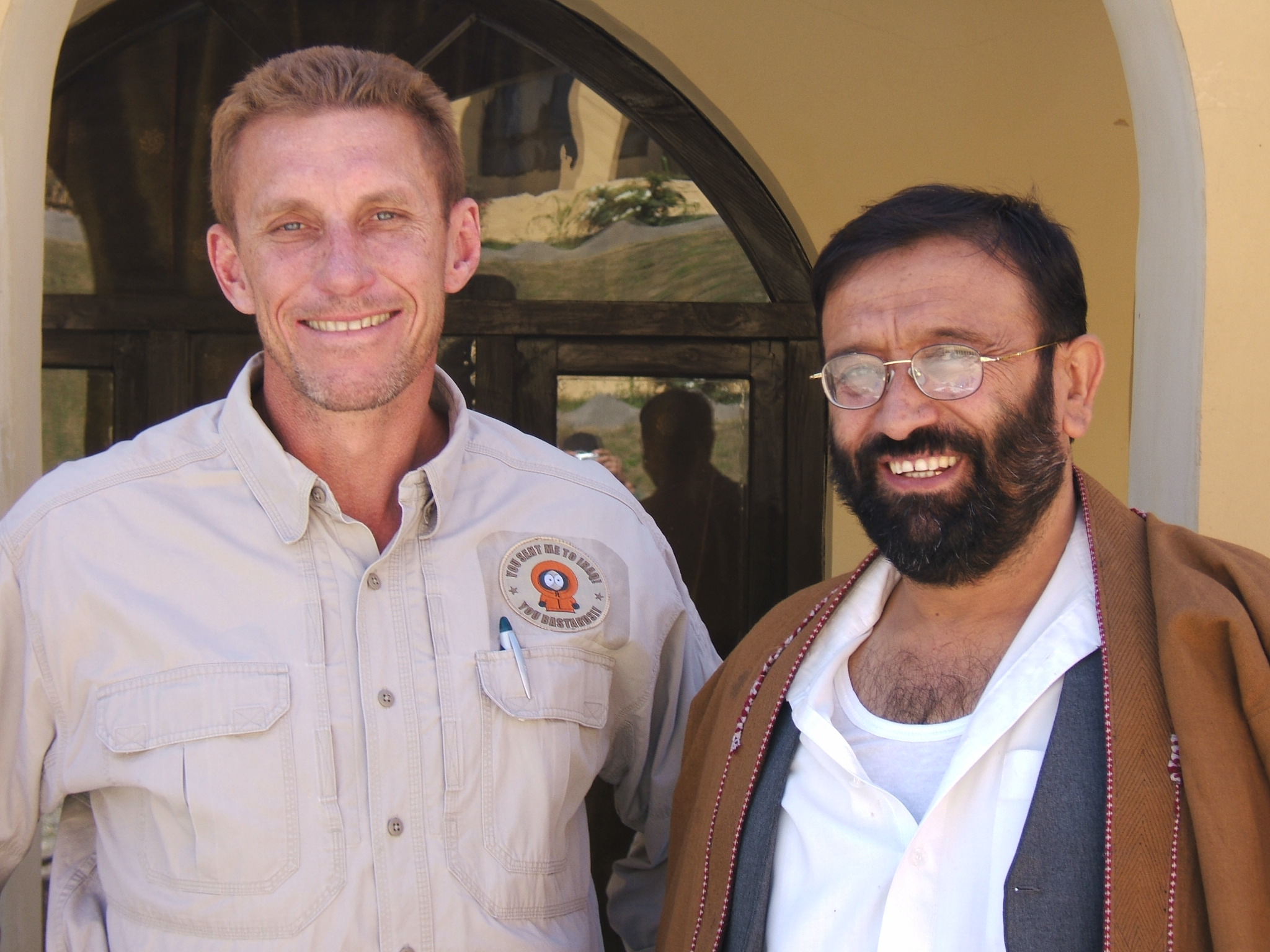 This is a picture of the Imam but I do not remember his name. My Afghan friend who arranged this meeting was killed long ago and I’m not sure if the Imam has met the same fate. I was new to Afghanistan when we talked and supremely confident that we were going to be able to fix the infrastructure and leave behind a functioning government. I told him this stressing that we’d done the same for Germany and Japan and there was no question we’d be hooking them up in a matter of a few years.

He told my friend Waheed and I that buildings, roads, schools, airports….none of the infrastructure we thought important was important. The hearts of the Afghan people was the only thing that mattered and his fear was the people, after so many years of war and abuse, would not be able to find it in their hearts to return to the Afghan ways of peace with each other and hospitality for foreigners.

I remember being stunned by this; I wasn’t sure what he was talking about but knew I was talking with a man of vast knowledge, great insight and one who was one of the more decent of our species. His fear was (I now believe) that Afghans would succumb to the contagion of nihilism. From the Internet Encyclopedia of Philosophy:

Nihilism is the belief that all values are baseless and that nothing can be known or communicated. It is often associated with extreme pessimism and a radical skepticism that condemns existence. A true nihilist would believe in nothing, have no loyalties, and no purpose other than, perhaps, an impulse to destroy. While few philosophers would claim to be nihilists, nihilism is most often associated with Friedrich Nietzsche who argued that its corrosive effects would eventually destroy all moral, religious, and metaphysical convictions and precipitate the greatest crisis in human history.

I believe this describes the motivation behind the Afghan males who are raping and pillaging the welfare states of Europe. What is ironic is this is the same motivation behind the Anti Fa movement. Ironic because the Anti Fa folks come form the wealthiest civilization the world has ever known while the Afghans come from one of the poorest. Both groups appear to have nothing but contempt and hatred for the West. For Afghans that contempt is, for the most part, reinforced by their religion. For the Anti Fa that contempt is their religion.

Both groups use violence in the most cowardly of manners. The Anti Fa will not hesitate to attack and assault those outside their group as long as they have enough fellow travelers with them to avoid consequences. When they don’t have the numbers they cowardly assault people who aren’t looking and run away. The Afghan rapists use an identical methodology only attacking victims when they have overwhelming numbers or when their victims are isolated, alone and unaware.

Both groups are morally repugnant to western man (collective not gender term here) and both groups represent a clarion call, to all who are paying attention, that there is something drastically wrong with the current status quo.

Both of these groups will continue their depredations on the citizens of the west until they are faced with quick and sure consequences for their behavior. Western Europe seems to be incapable of delivering quick and sure justice in the face of this epidemic of sexual assault. Eastern Europe, as a consequence of decades of Soviet oppression, has no problems figuring this out and doesn’t have this problem.

The United States seems incapable of responding appropriately to the increasing amount of left wing Anti Fa violence. Our country is too divided, our media too corrupt and our system of justice hopelessly compromised to favor the rich and powerful over the just. Our politicians are weak and our media/infotainment complex has become 24/7 propaganda for liberal elite bromides that will never survive contact with reality.

I have no idea how this could end well for the vast majority of the law abiding, tax paying citizens. Modern liberalism is destroying the moral, religious, and metaphysical foundations of western civilization and replacing them with what? Mandatory speech codes, long lists of ‘rights’ that ignore responsibility, open border welfare states, ever increasing taxes aimed at the productive classes…the list is endless but the destination clear; the fists of fascism clocked in the velvet glove of ‘compassion’.

It would be of no small comfort to see more great men, like the Afghan religious leader pictured above, reach positions of prominence where their sage council could counter legacy media spin. But in our current cultural climate that is not going to happen. There will have to be a reset back to principals and traditions that made Western Civilization one of the greatest civilizations the world has ever known but it will only come after a catastrophic event. The question is how many millions will die before that happens? In the Soviet Union the price was 20 million dying of starvation after the State declared the Kulaks (successful farming class) enemies and liquidated them. In China 45 million died in just four years during the “Great Leep Forward“. Both those states have veered sharply away from socialism towards the free market.

What is it going to take for us to re-learn what we once knew about the foundations of our great civilization? I don’t know but fear the butchers bill will be high. What I do know is the elites who got us into this mess will not be held to account in this life.  But that is way of the world, something we can accept with the stoic resolve that motivated our forefathers to carve a rich prosperous land from the wilderness.