July 4th is the perfect day to launch a campaign aimed at uniting Americans behind a national hero of whom we can all be proud. In prior posts I have nominated the RQ-4N BAMS-D (Broad Area Maritime Surveillance-Demonstrator) drone that arrived in the Persian Gulf on the 15th June and was shot down by Iran five days latter.

The day after we lost our drone the United States launched a retaliatory strike on Iran, but called it off at the last minute. Concurrent with the feint (or aborted) attack, a real cyber attack hit the Iranian Missile Control Systems and devastated them.

There is an obvious connection between an old surplus drone being sent to the Gulf and then promptly shot down, and the subsequent cyber attack. Cyberattacks on closed systems (like missile control systems) have a limited number of entry routes. Either a human agent or a targeted platform introduced the virus. Given the Central Intelligence Agency’s  record regarding human intelligence the chances they had someone on the inside are beyond remote.

I believe the attack was effective because Richard Fernandez, writing at the Belmont Club, said they were. Mr. Fernandez is a proven source of consistently good geopolitical analysis. He could be wrong, I have no way of knowing, which raises the question of who and what can you believe in this day and age?

In an era when the press and politicians use devise rhetoric to separate and categorize us along racial or ethnic lines it is hard to know what to believe, or who to trust.  I believe in and trust the American people.  At this moment in our history  the American people need a hero and what better hero than a unarmed drone with a story  that inspires and educates?

A hero needs a name that has meaning and on July 4th what could have more meaning than a name that acknowledges the genius and wit of the British peoples?

When Britain’s Natural Environment Research Council decided to allow the British people to name their new 300 million-dollar Arctic research ship the people, recognizing a boondoggle, insisted it be name Boaty McBoatface. The ship is now named the RRS Sir David Attenborough, public opinion be damned, but to me and millions of Brits it will always be Boaty McBoatface.

Thus I propose we name our hero drone Droney McDroneface. 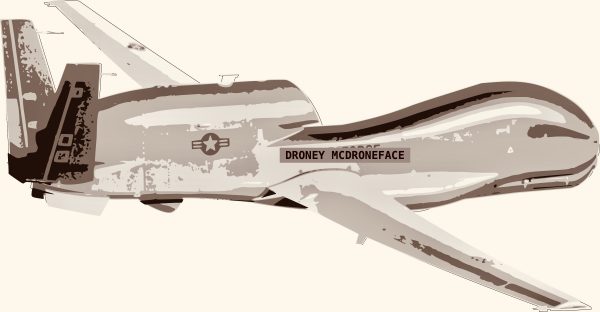 The 4th of July is the perfect day to recognize Droney with a tip of the hat to the British people. But his accomplishment is only important because we are now energy independent. The story our energy independence starts on July 4th, 1845. On that day the Texas legislature held an emergency meeting to accept an offer from the United States to become the 28th state.  For ten years Texans had been pleading with the United States for entry into the Union and for ten years they had been held at arms length due to international treaty obligations with Mexico and the issue of slavery.

The Texans had capable leaders and they had started to flirt with Britain, France and Mexico at exactly the time that the United States realized it need to own the land all the way to the Pacific as a strategic necessity. Texas drove a hard bargain and part of that bargain was the the Federal Government could not claim or own any land in Texas.

As an aside the only member of the Texas constitution committee who had been born in Texas was José Navarro of San Antonio. We’ve been a multicultural country from the start, a point seldom heard in national discourse these days.

In the words of the immortal historian T.R. Fehrenbach, the founders of Texas thought they had joined a “country so great that even fools could not completely destroy it“.

The greatness of America has more to do with the land and the people then specific programs or forms of government. We are in a strategically dominated position because we found a way to extract petrochemicals efficiently using new technology. The people, not the government made us energy independent.

Iran now has no missile defense capability because Americans engineered a way to attack and disable it without shedding a drop of blood. The people, not the government developed that technology.

All peoples remember great events of their past by telling stories that organize the action into a coherent narrative. The narrative behind Droney is easy to map out without triggering any special interest. Droney was unarmed, an outcast scheduled for the bone yard, Droney was bi-partisan, nobody used drones more than the Obama administration. Droney is gender fluid, I refer to him as ‘him’ not to offend any other gender, but  because I too am a him. But Droney could be a ‘her’ or an ‘it’ or a ‘post op transsexual’ drone; it doesn’t matter. Droney can be all things to all peoples.

Droney McDroneface  wasn’t like the other drones, he didn’t fly at 60,000 feet or have weapon pylons or the ability to loiter for hours on end and then rain death and destruction down from on high. He had no crew, he had no mission, he was headed to the desert to be mothballed.

Then one day contractors came and started performing preventative maintenance, they refurbished every system and outfitted him with a special payload. Droney got the mission brief; he was destined to be shot down by the unhinged mullahs in Iran.  But before they got him he was to feed a special packet into the systems that interrogated him. His sacrifice would ensure the flow of oil to Africa, Asia and the Pacific Rim. Granted it would be great for America if the price of oil started to climb but the world economy is bigger than the American energy market so Droney had to go.

Drowney flew to the Al Dhafra Airbase squawking that he was an MQ 4C Triton which he is not. There he sat, in a secluded hanger, as the same techs from Pax River worked him over again but there were now dozens of military officers watching them, taking pictures of his insides, talking in low, hushed tones about something important.

Droney received a new paint job, he was now orange, which was weird. He had new nose art added (a big, sweet , innocent, smile)  and the letters MAGA where US Navy had once been.  There was a large human fist drawn on his fuselage with the middle finger standing straight up. Droney didn’t know what that was all about but the Air Force guys who painted it were laughing the entire time they were there.

Just days after he arrived he rolled out into the evening twilight, rested, focused and fit for the last flight he would ever make. Without a moments hesitation or a drop of remorse he launched into the night sky and into the pantheon of American hero.’s. as the first cyber warrior to deliver a knock out punch without spilling one drop of blood.

That is story of American grit and ingenuity of which we can all be proud. If I can generate enough interest in Droney McDroneface then a merchandising campaign will ensue. I have to come up with some cash for the Rio Grande Valley Marine Corps League Color Guard. Somehow I got put in charge of that detail and I told the guys I’d take care of getting the flag poles and harnesses and stuff because I had no idea how much that would cost. Now I’m stuck, but I think Droney might get me out of a bind and the American people behind a true hero all at the same time.

Happy 4th of July and let me leave you with a smile: