Monday marked the 100 year anniversary of Afghanistan independence. August 19, 1919 marked the end of the third Anglo-Afghan war and joins Al-Faath day(a Muslim military victory) and Mujahedin Victory Day (the victory over the Soviets) as a public holiday celebrating Afghan martial virtue. This holiday was heavily anticipated and the road up to Dar-ur Aman  palace strung with lights and vendor stalls to mark the celebration. My good friend JD wrote an excellent man on the street piece for dpa International that can be found here. It is worth reading.

JD had published an article just yesterday in dpa International that was seething in undisguised rage at yet another bombing targeting civilian Afghans. A bomb went off in the vicinity of Dar-ul Aman road targeting a wedding party  killing 63 people. Hundreds more were injured. What JD could not say (because he is a reporter) was what we both (and everybody watching Afghanistan) knew and that was this was the work of Daesh-K (ISIS). We knew this because the area along Dar-ul Aman road is predominantly Hazara, who are Shia, and thus enemies to the Sunni ISIS movement.

This comes as the United States prepares to significantly draw down its military commitment, just like we did in Vietnam, but this time we cannot pin this on a hostile  congress. Well that is not technically true, we can blame congress for failing to use the war powers act. They could have tied funding to an achievable end-state allowing the military to tell them the forces needed to achieve that end-state. That is how the system is supposed to work, but it never seems to work that way. I think that’s because politicians are much more comfortable making decisions about foreign commitments after they’ve started. Stands on principal are not how congress people get to congress, that they failed to use their own laws to bring some order to the chaos is not a bug in our electoral system, It’s a feature.

As Afghanistan recovers from yet another senseless attack on the people the Taliban leadership received a dose of Kummerspeck inspiring bad news.  This came in the form of a report from Pakistan’s Federal Investigation Agency detailing their lavish life styles and investments.

It turns out that Taliban politicians are every bit a venal and corrupt as the non Taliban type. But the leaders of the Taliban are not savvy to the ways of media or that bright when it comes to Pakistan because they reacted to this report with undisguised fury. They do not know what they do not know, and one of the knows is that the Streisand Effect is real.

Why the Pakistan Federal Investigation Agency released this report is an interesting topic to speculate about. I doubt the press will do much speculating because most paths are going to lead to the recent statements by President Trump concerning the need for both Pakistan and India to do more about the terrorist in their midsts.

Remember Daesh-K started out as Pakistani Taliban who fled across the border into Nangarhar province to escape from Pakistans military operations Khyber I and II. And calling out India…I don’t think I’ve seen that before and that too is interesting. Maybe there is diplomacy occurring that is actually producing results. Pakistan called out the Taliban leadership and face smashed them. Afghans are excellent volleyball players and they know exactly what face smash is and what it means.

I am running out of things to say about the tragedy unfolding in Afghanistan. It breaks my heart because I love the people of Afghanistan. When I arrived in that country I had no knowledge of the place. I learned fast because I was never on a FOB and lived in the ville with the locals for most of my time there. They taught me how to navigate the social systems, they taught what was real risk and what was not. They protected me, feed me and gave my children the experience of a lifetime. I  like to think I returned their investment in spades but who knows? That is not for me to judge.

I’m going to start writing Afghanistan stories about things like having my children there with me, meeting interesting people and visiting interesting places. In the end, the families of the dead, those that served there in the military, and the contractors who served with the military and outside the wire  are always going to ask was it worth it. I say that too is not for us to judge.

I know some of the Afghans caught in crossfire knew we did not do that intentionally. I’ve talked to plenty of them, I too got shot at for getting to close an army convoy, I understand Afghan frustration about that well.

But I bet in 20 years if you are American in Afghanistan you will treated like an American in Vietnam. Which means very well. 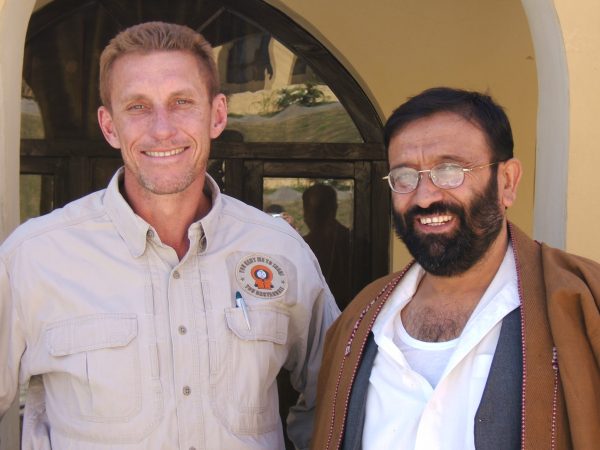 In the photo above I am with senior Islamic Cleric, but I cannot remember his name. I’m wearing recycled contractor clothes, where there once a name-tag I had a South Park cartoon character saying “You sent me to Iraq You Bastards”.  I thought that was funny because I just came from Iraq. I was to learn that Afghans were not amused by American curse words. But having a stupid shirt on is not why I remember this meeting with embarrassment. That Cleric was one of the most charismatic, wise, men I have ever met. In an effort to impress I remember telling him how quickly we would re-build the country, get the hydro generators working, build the roads and schools, etc…

I remember him looking at me and smiling and shaking his head. He said something like this; “the buildings and the roads and the electricity are not important. It is the people who have been damaged by decades of war that are important and it is the spirit of the people that must be restored. America cannot do this for Afghanistan, we must do this ourselves”.

What do you say to a profound statement like that? I don’t remember what I said, but I never forgot that conversation. It was humbling and a harbinger for the failure our efforts in Afghanistan were destined to have.

One Reply to “A Not Happy Afghanistan Independence Day”