This morning at the Imam Khomeini Space Center in Semnan province, Iran a rocket, reportedly carrying a Nahid-1 telecommunication satellite, blew up on its launch pad. 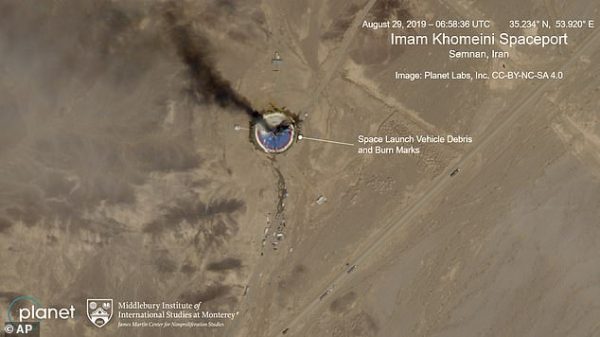 I think the Iranians are suddenly having missile dysfunction secondary to a Droney McDroneface infection.. Earlier in the summer I proposed that the sudden appearance and subsequent disappearance of an old washed up RQ-4N BAMS-D (Broad Area Maritime Surveillance-Demonstrator) drone I named Drone McDroneface.

That story was picked up by Soldier of Fortune Magazine and trended on twitter for 37 seconds. Media experts, like Alex Hollings, carefully examined my theory and patiently explained why it was ridiculous. It may well be, but it’s a good story, and about as accurate as your average legacy media story about President Trump.

Plus, the Droney story chunks information in a easily understood manner. When you hear that another Iranian missile blew up and killed its satellite you’ll already have a good understanding of why that happened.  Efficiency in digesting complex news about international events can be difficult, so I’m doing my part to make it easier with simple stores about complex things I think I know something about. The stories may or may not be true but you and I wouldn’t know it they were or weren’t true, so who cares?

This Labor Day Americans have much be excited about. But the Oregon/Auburn game will be over by midnight Saturday; what are you going to be excited about then? You can get excited about whatever, but at some point during the weekend festivities,you might might want to take a second to remember the sacrifice of Drone McDroneface.

I know what you are thinking; I’ve been watching Better Than Us on Netflix too. That killer robot, yoga instructor- looking- woman lead character is truly scary. Figures it’s a Russian TV show, but that’s not what I’m talking about.  And who cares about Russian TV shows during Labor Day anyway? If you do, you shouldn’t, you should get outside more and while outside pause, look up into the sky and think about our hero Droney. He (or she or zir…Droney was unarmed and PC)  is giving the Mullahs fits to this day and that is a record to be proud of.