I recently read a fascinating article on how Storm Water Hydrologists evaluate the risks of significant flooding events. The article was titled The Surprisingly Solid Mathematical Case of the Tin Foil Hat Gun Prepper and is one of those articles that explains technical details I did not know. The author did the math to show that we have a 37% chance of witnessing a revolution in the United States during our life time. A simplified version of that math is below, but do read the article to get the background behind the formula: 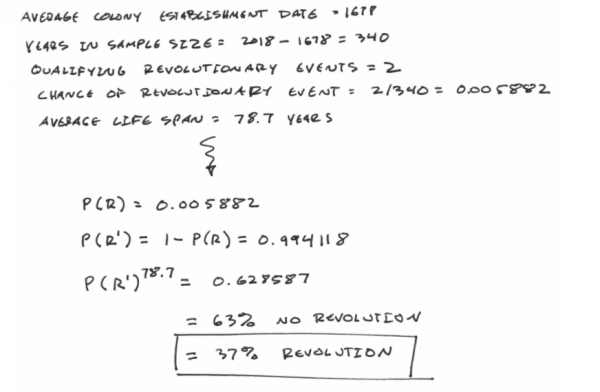 If you think that extreme check out this paragraph from a New Yorker article about super rich preppers:

Yishan Wong, an early Facebook employee, was the C.E.O. of Reddit from 2012 to 2014. He, too, had eye surgery for survival purposes, eliminating his dependence, as he put it, “on a nonsustainable external aid for perfect vision.” In an e-mail, Wong told me, “Most people just assume improbable events don’t happen, but technical people tend to view risk very mathematically.” He continued, “The tech preppers do not necessarily think a collapse is likely. They consider it a remote event, but one with a very severe downside, so, given how much money they have, spending a fraction of their net worth to hedge against this . . . is a logical thing to do.”

In the last ten years there have been six active shooter incidents on American military bases. The list starts with the killing of 13 (wounding of over 30) by Major Nidal Malik Hasan, an Army psychiatrist, and ends with yesterdays shooting at Naval Air Station Pensacola.

Using the formula above (which is the same formula used to determine flood plain risk) the math predicts your chance of encountering an active shooter event aboard a military base is 47%.

Last month the Department of Defense released a plan to allow concealed carry on military bases. It may surprise most citizens to learn that a concealed weapon aboard a military base now is a serious offense. Any potential active shooter who wants an area with lots of targets where the only chance of armed intervention is from uniformed officers arriving on the scene; an American military base is the perfect venue.

When discussing  the probability of competent armed intervention by concealed carry permit holders into an active shooter scenario there are few places with more people who trained in the use of small arms than an American military base. The last place an active shooter should ever have success is on one.

When the number of armed citizens is unknown, but probable, friction is injected into the active shooter scenario. An example of friction occurred in another shooting on a military base that was not included in our sample.

In 1994 Air Force Staff Sergeant Andy Brown, a Military Policeman, was on bike patrol at Fairchild Air Force in Spokane, Washington. A gunman, armed with an AK 47 started shooting a the base hospital and had already killed four and wounded 19 people before SSgt Brown arrived on scene. He proceeded to stop the shooter with a 70-yard head shot using his M-9 Beretta service pistol.

The Beretta M-9 is a crappy pistol that is difficult to run. The only way to hit someone at 70 yards with one is to cock the hammer to make the shot using the single action feature of the two stage double action/single action (DA/SA in gun talk) trigger set-up. Andy Brown knew this because he was one of those guys who decided he needed proper training to carry a pistol. He paid on the civilian market to get that training and he is the perfect example of the Pareto Principal (that stipulates 80% of the work is done by 20% of the workforce).

Andy Brown was a uniformed officer who responded to the event which seems to bolster the argument for allowing only the police to react. But he is no ordinary police officer, he’s an outlier. You can study thousands of active shooter responses and you will not find one where an officer, after riding a bike as fast as he could for several miles, took and made a 70 yard head shot.

That is extraordinary gun handling and marksmanship, fortune favors the prepared, in my opinion Andy Brown earned whatever luck he had on hitting the x-ring from so far away. Not many police officers could do that.  I can name, off the top of my head, over a 100 guys who could make that shot without breaking a sweat. None of them are current police officers, some of them have no police or military experience. They are out there by the thousands and most have made the decision to carry.

Andy Brown was not your average Air Force policeman. On most bases, there are plenty of servicemen and women who could have intervened, as effectively as he did,  if they were allowed to  be armed. Historically unarmed service members (and civilians) have run to the sound of the guns during these incidents to try and intervene. The recent derailing of a terrorist attack on the London Bridge by citizens who armed themselves with found objects (including a Narwhale tusk) is a good example.

I mentioned the Pareto Principal because my best guess is around 20% of the service members (and civilians) serving on American bases would choose to carry. If my guess is in the ballpark that is enough friction to make a difference with the problem of active shooters on military bases. The same would be true of public schools.

An added benefit to allowing concealed carry on military bases is the propensity for commanding officers to insist on additional training on the employment of concealed pistols if their troops are going to be allowed to carry them. Here’s why that is a benefit:  do you know the one segment of the American military that does not have a problem with negligent discharges into clearing barrels? The United States Air Force Military Police. Do you know who routinely carries their pistols in condition 1 at all times? The Air Force Military Police.*

Condition one on a M-9 service pistol is a round in the chamber, hammer de-cocked, and the de-cocking lever up in the fire position.  On every FOB overseas the military has soldiers clear their weapons (magazine out, chamber empty de-cocker down in the de-cocked mode). Every FOB has been plagued by an alarming number of negligent discharges into clearing barrels.

One would think the example set by Air Force MP’s would be more widely duplicated; allowing concealed carry on base essentially does that. You don’t clear concealed weapons, not knowing they are there is the point of concealment. Maybe if commanders grew acclimated to troops with condition 1 weapons at all times they would  more away from the “clearing weapons” problem.

I never actually “cleared” my pistol at any FOB in Afghanistan but I was running a 1911 and the only way to engage the safety is in the locked and cocked configuration. A cleared 1911 looks identical to a hot one and I don’t understand carrying a pistol that is not hot.

There is a 37% chance that I could see a revolution in this country during my  lifetime but, there is very little I can do to mitigate that risk. The 47% chance that I could run into an active shooter aboard a military base, while not that much more likely, is something I can mitigate easily. My next post will explain the gold standard for American Sheepdogs as explained to me by the man who first coined the term. He is David Grossman, the founder of the Killology Research Group, and for the last 20 years the most sought after police trainer in the world.