The most contentious aspect of the sheepdog concept is the concealed carry component. When we first heard David Grossman at West Point my fellow IOC instructors and I understood the sheepdog message but started to tune out the specifics when he heard the phrase “abstaining from alcohol”. We were Marine Corps infantry officers and that wasn’t happening.

Despite the emphasis on weapons, sheepdogs are most often unmasked by events that have nothing to do with having a firearm. Keanon Lowe, a high school football coach in Portland Oregon, disarmed and then comforted a distraught student, stopping a potential catastrophe before it could happen.  When he found himself in the breach, he stepped up, and that’s what I’m talking about with sheepdogs. Had he done the exact same thing at Columbine High School in 1999 he would have been shot dead. That’s what David Grossman is talking about with sheepdogs.

If you carry a concealed pistol because you cannot tolerate the thought of being unable to act in the infinitesimally remote chance that you are in a position to act, that is great. But having a medical trauma bag and the knowledge to use it is an infinitely more practical skill. The chances you will encounter an auto accident or medical emergency while you are out and about are near 100%. Having the skills to help without the tools is useless. You might be able to repurpose found objects to render some sort of primitive immediate aid, but when a competent person arrives with a trauma bag they are going to politely ask you to step aside.

When bad accidents happen enough people stop to allow the rest of us to, in good conscience, carry on. In this day and age the vast majority of people will never encounter gun violence or human depredation. But nobody gets through life unscathed by trauma.

Having a bias for action and the heart of a lion is not worth much without the capacity to act.  According to Grossman at all times and in all places a sheepdog must be ready to step into the breach. Nobody walks out of Thanksgiving dinner expecting a 122mm rocket to slam into the yard and kill a bunch of their friends. I didn’t; I should have because I was in the Green Zone of Baghdad (in 2004) working the American Embassy guard contract, but I didn’t.

The GP tent containing our Nepalese volleyball team instantly caught fire trapping wounded men inside. We were scheduled to play the Marine Detachment after standing post for them on November  10th. They were hosting a Volleyball tournament and barbecue for us in return, which is why we had a GP tent set up inside our compound – Nepalese are serious as a heart attack about Volleyball.

This called for some hero stuff like sprinting 100 yards and diving head first into a burning tent to pull out the wounded. Two of my colleagues, an American and an Australian, did just that, but not me. By the time my fat ass had jogged 100 meters the window of opportunity for rescue had closed. That will never happen to me again, it should not have happened in the first place.

The consequences of failing to act during a moment of crisis will reverberate through the entirety of a life. The ability to act in a moment of crisis will likewise reverberate through the entirety of your life. The guilt associated with failing to act because you could not act due to a complacent, sedentary lifestyle….can ruin a life.

The humiliation at falling short when in the breach combined with later experiences in Afghanistan forced me to adopt most of the Grossman Sheepdog standards. In doing so I discovered that the Sheepdog creed guarantees exceptional quality of life as we age. That contention, as is everything sheepdog, is validated  by Joe Rogan himself, the most trusted man in America today.

I will cover the Grossman standards of concealed carry in my next post, but one of his mandates was (when he laid this out in the early 90’s) abstaining from alcohol. The reason is simple; if you are carrying concealed and consume any alcohol you are, by definition, outside the color of the law. To David Grossman the alcohol thing requires no further explanation. To Marine Corps infantry officers abstinence from alcohol was crazy man talk.  But when you get past 60 and have type 2 diabetes that requires daily injections of insulin, not drinking alcohol is easy. And it turns out you sleep better if you don’t drink, who would have thought that?

Plus, if you are over 60, and not on a regular strength training program, you have  problems with the concept of cause and effect. The science on  strength  training for the aging is both clear and unequivocal. The only way to mitigate cognitive and musculature degeneration as you age is by strength training. This fact is so well know that I include no Joe Rogan link; he has hundreds of hours talking with scientists, physicians, writers, martial artists, SEAL’s, CIA agents and a Marine or two on the topic.

I am a disciple of former NFL player Pete Koch. His routines are difficult and include lots of squats because (as he often says) when you can’t squat to use a toilet it’s over. 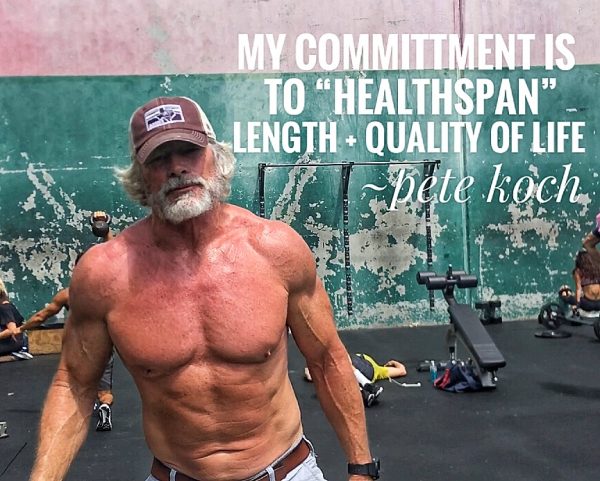 If you can do three of Pete Koch’s 30 seconds at a time routines, without stopping, you are in exceptional shape. His training is designed for the geriatric set but most 30 year olds couldn’t do one of them. They are ball busters. For Marines, Pete Koch has a special place in our hearts because he played a Recon Marine in the popular Clint Eastwood movie Heartbreak Ridge in the 80’s.

When you look at Pete Koch or Joe Rogan you are probably thinking that it is impossible to attain that level of muscular development and conditioning past the age of 50, let alone 60. For most of human history you would have been correct, but not now.

Joe Rogan has talked dozens of times about testosterone replacement therapy (Test as the cool kids on Rogan call it) and the importance of maintianing optimal hormonal balance. I have three years on the Test, HGH, and several other supplements recommended by Rogan or his guests.  My experience is they allow you to work out with more intensity, recover faster, and add lean muscle mass. For married men the additional benefits from increased free testosterone will be appreciated by your partner.

Obtaining these supplements (Test and HGH are injectables) is easy and the testosterone covered by most  medical insurance plans. If you get on schedule, start working out hard, and stay with the routine for a few months, you will be amazed at the difference. There are supplements for women so this is not a gender specific thing, my wife is on them too.

But you will not start to look like Joe Rogan or Pete Koch unless and until you are on a strict diet.

The science here too is unequivocal and the topic covered in depth on dozens  of Joe Rogan podcasts. For years I supplemented and worked out hard but this year I got serious about diet in an effort to reduce my dependence on insulin.

I use a local branch of the national franchise that has weekly weigh-ins/body analysis and prepares lunch and dinner meals for clients based on the results. With the exception of bullet coffee in the morning I drink only water. It’s not easy to stay on the diet but nothing worth doing is easy.

The latest Science tells us you can lower your biological age with diet and exercise. Knowing that is all the motivation some people need to get and stay on a program, but it wasn’t for me, and I doubt it is for you . I write this knowing that motivation and self-discipline are the keys to a quality life (here is the validation of that from Joe Rogan).

But knowing something and acting on that knowledge is tough.  I came at the Sheepdog thing backwards. Once I found myself living the way David had recommended all those years ago, I discovered the magic of Trijicon RMR sights. Glock make a model 19 with the slide already cut for reflex sights and the trigger on it is not bad. If I did need the tool I can now employ it with precision, so why not carry the tool? It reinforces what you should be fostering in your self image and that is you are both disciplined and dangerous. Jocko Willink and Jordan Peterson cover that topic here.

I adopted the harsh physical conditioning standards of David Grossman after learning the hard way the price of not doing so. Despite listening for years to Joe Rogan and his guests talk about the importance of diet, I did not take their advice seriously until my diabetes was out of control. Now that I figured it out I thought the secret is worth sharing. You can even  us an appendix rig to carry when the stomach flattens, finally, after how years?

I hope all of you have a Merry Christmas, a holiday I dreaded up until a few years ago. If you’re a Vet (or not) and are reading this and you are alone this holiday season leave a message in the remarks. I want to talk to you.