My first Apocalypse Not post speculated that the Wuhan Corona Virus had already washed through the continental United States. I based that on my understanding of viral transmission rates combined with the length of time between the arrival of the virus and the start of mitigation efforts.  I had no explanation why the virus had passed through the population without sending massive numbers of Americans to the hospital. I have an explanation now.

On the 3rd of March The Oxford Academic National Science Review published a study titled On the origin and continuing evolution of SARS-CoV-2. An extract from the overview is pasted below:

Population genetic analyses of 103 SARS-CoV-2 genomes indicated that these viruses evolved into two major types (designated L and S), that are well defined by two different SNPs that show nearly complete linkage across the viral strains sequenced to date.

This would explain the significant lag time between the arrival of the virus and a noticeable surge in hospitalizations. In fact there is still no noticeable surge of hospital admissions for pneumonia in the USA. I just goggled that and found nothing.

The current panic being stoked by the legacy media and the actions being taken by  politicians are based off modeling by  highly credentialed  experts. The models have predicted that we are on the brink of a massive surge in hospitalizations due to respiratory complications (bilateral pneumonia). These results have to be taken seriously despite knowing the models have serious limitations.

Reporter: “Can you speak to the study predicting as many as 2.2 million people in the United States could die if there were not this kind of action taken by the government”.

Dr Burke: “ So I think you know the models are models and are  based on input and they’re based on infectiousness without any controls. I can tell you we’ve never seen that level of infection modeled up to 2.2 million in mortality… I have dealt with a lot of modelers in my time, they are wonderful people, but they all have their favorite inputs and they all have their favorite integration functions, so we’re evaluating all of those so we can integrate and create the best model for the United States based on the best data.

The State of Texas has now joined the panic and demanded all gyms, restaurants, and bars close. The damage that will done to our economy is incalculable and remember there has been no surge in deaths or hospital admissions reported yet in the USA.

There is no reason to believe the models without seeing evidence that the models are correct. Tweets like the one below are not helping anyone, Dr. Scott Gottlieb has less observable truth behind his tweet then I do with my two strains, no apocalypse theory. 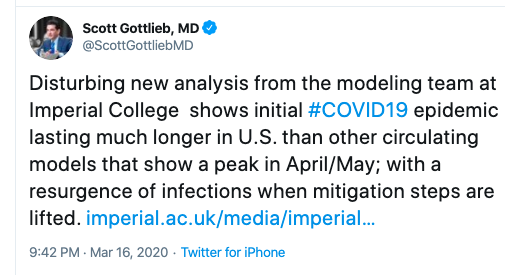 Each day that ends without a reported spike in viral pneumonia deaths should be raising questions. In this era of diminished corporate  media, desperate for clicks and page views, it is difficult to tease out what is important. What is important is an explanation as to why so many senior leaders are taking such drastic action. Is this based solely of computer models and WHO concerns? That is hard to believe but what other explanation is there?

I do not know if the testing being developed for the Wuhan virus can differentiate between the L and S strains. I suspect,  just as Dr Burke has said repeatedly, that the number of reported cases will skyrocket as more testing comes on line. I also suspect that there will be no giant spike in COVID-19 deaths because the COVID-19 S strain has already washed through the population.

Time will tell, but if we don’t see a giant spike in hospital admissions soon we’ll know we have dodged a huge bullet thanks to the hyper competitive nature of Mother Nature. Having a mild flu out-compete a deadly flu for hosts, thereby saving the host reservoir for another day…you can’t make that kind of stuff up.