It is now obvious the modeling driving the COVID-19 response was wrong. They caused the nation to overreact and now that we realize COVID-19 is not the threat we were told it was what do we do?  What theTrump Administration just did, right in front of you, was disappear the models, switch data sets, and start talking recovery. It was awesome to watch made more so by the fact that not many people realized what they were seeing.

During Thursday’s Corona Virus Task Force presser all mentions of modeling were gone, replaced with slides from the   US Outpatient Influenza-like Illness Surveillance Network. From the linked article:

Birx said the Centers for Disease Control and Prevention will be relying on its existing surveillance practices for “influenza-like illnesses,” which will be attuned to look for coronavirus, and fielding more new tests even for asymptomatic people to get better fidelity about the pervasiveness of the virus. 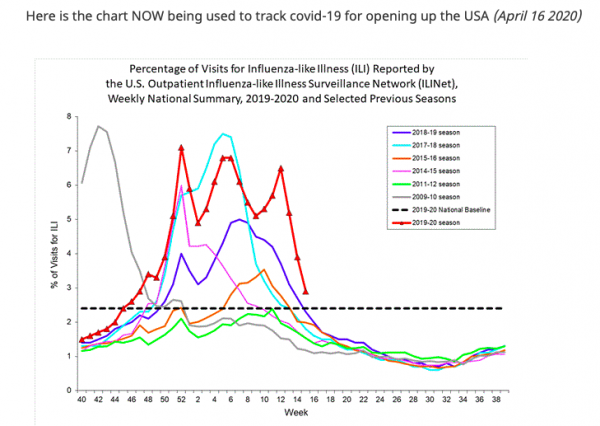 It appears the death rate from this virus will not exceed the number of flu deaths from the 2018-2019 flu season. We are learning, through anti-body testing, that the China Flu bug arrived here earlier than thought and has already passed through a good percentage of the population.

This is fantastic news but we’re not celebrating, or relaxing the lockdown, or re-starting the economy.

In Texas our governor has just appointed a commission to look at how to open up the state. When he announced the members of the commission he included Ross Perot, who died a year ago, which is suspicious. We are weeks away from spring football practice and the governor, instead of acting on facts, is appointing dead people to commissions. That is not very Texan like and I wish we had a better leader like one of the seven governors who were not bullied into economic suicide by hysterical progressive elites.

On the very day Governor Abbot announced his strike force Governor Inslee of Washington State launched a tweet storm of unhinged ad hominem attacks on the President. He is convinced The Wuhan will mow down millions if we dare break the protocols established to flatten a curve that never came, predicted by models that were wrong. 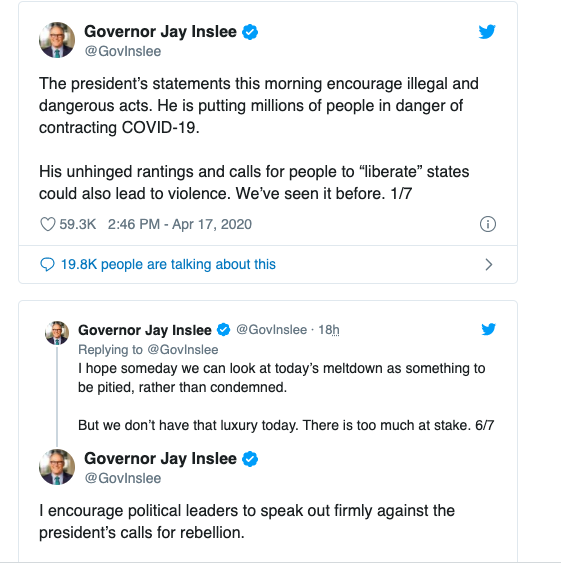 The insistence of progressives politicians in believing the obviously flawed models of elite academics is going to, without question, kill Americans. And we don’t need models to know how many. Citizen Journalist Betsy McCaughey points out:

No model or guesswork is required to foresee the deadly impact. Job losses cause extreme suffering. Every 1% hike in the unemployment rate will likely produce a 3.3% increase in drug overdose deaths and a 0.99% increase in suicides according to data provided by the National Bureau of Economic Research and the medical journal Lancet. These are facts based on experience, not models. If unemployment hits 32%, some 77,000 Americans are likely to die from suicide and drug overdoses as a result of layoffs. Scientists call these fatalities deaths of despair.

The impact of layoffs goes beyond suicide, drug overdosing and drinking. Researcher Michael French from the University of Miami points out the death rate for an unemployed person is 63% higher than for someone with a job. It is obvious that the unwarranted and unnecessary lockdowns come with a butchers bill that is larger than the COVID-19 threat.

Why can’t our leaders see this? There are dozens of pieces coming out daily pointing out the same thing yet the narrative continues on as if the pandemic is performing as predicted.

After the terrorist attacks on 9/11 our country went through a spasm of federal government action to “make us safe”. What came of that was the TSA. The TSA is in the business of ‘Security Theater‘; it fails, over 95% of the time, security tests. They routinely allow weapons and ammunition to be unintentionally carried onto aircraft, something I’ve done myself. No security professional mistakes the TSA as anything other than Kabuki Theater. If you want safe air travel screening you need to do it like the Israelis do, but we won’t do that because of Muh Racism.

The Kabuki theater being generated by this crisis is going to be continued  ‘social distancing’ and mask wearing. As Dr John Lee, joining hundreds of other reality based front line physicians like Keith Rose and Jonathan Greach, point out there is no direct evidence the lockdowns are working. The argument that social distancing and mask wearing slows the spread of the Wuhan virus makes sense, but then again so does the argument for developing  herd immunity.

It is impossible to evaluate scientific data when the credentialed experts working the data do not agree on what it is saying. Occam’s Razor is a solid approach and it was the reason I have said at the start of the Pandemic, that we were too slow and bug had long ago escaped into the population. I had no way of knowing it would prove mostly benign but it did and here we are.

The truth about the threat of COVID-19 is obvious. The reluctance of progressive democrats to accept that their academics, experts, and pundits were wrong is fascinating to watch, but this isn’t funny. Lives are now in jeopardy by continued forced unemployment and forced loss of assets on the part of local and state governments.  If this does not end quickly we are going to lose more than the 2020 NCAA football season.