A few weeks back there was a Black Lives Matters protest in downtown McAllen, Texas. They did not get far before being confronted by a local man with a chain saw. The man was screaming racial slurs which he, uncharacteristically for these parts, helpfully translated into English for those who are a little rusty with the lingua franca.

The man was arrested after scattering the handful of over socialized, under educated, upper middle-class white kids who were protesting in support of Black Lives Matter. Black lives are not a thing in South Texas where blacks are less that 1% of the population and the vast majority are Hispanic.

So, while the rest of you are dealing with riots and cancel culture  we are dealing with an outbreak of SARS CoV-2 that is threatening to overwhelm our hospitals. As is expected with democrat declared emergencies nobody actually knows any SARS CoV-2 patients, the local hospitals are still laying people off and hemorrhaging money. Despite a total lack of any evidence other than news people droning on about increased numbers Hildalgo County Judge Richard F. Cortez decreed that as of midnight tonight (19 June) masks must be worn in all businesses, at all times in the Rio Grande Valley. Even when you are working out in a gym.

I do not believe the new COVID numbers for the Rio Grande Valley and nor should you. Dellridge Health & Rehabilitation Center in Paramus New Jersey leads the nation in nursing home deaths according the Federal Center for Medical and Medicaid Services (CMS). CMS reported that Dellridge had 753 deaths (in a 96 bed facility mind you). The facility had reported 16 deaths of patients who tested positive for COVID-19. 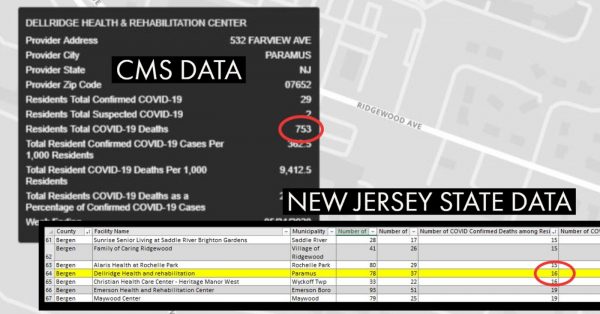 We know the media and the CDC have engaged in gross inflation of the COVID numbers and it is not a mystery why. Any attempt verify an increase in COVID numbers at local hospitals in McAllen are thwarted by armed guards and recalcitrant public affairs officers. There is no way to know what the hell is going on because trusting the government or media to tell us what is happening is for knaves or fools.

As is the case in every progressive district across the land our  judiciary is dangerously unaccountable and mostly a validation mechanism for the imposition of elite opinion. Elite opinion is Orange Man Bad and they have been engaged is a systematic campaign to undermine the President since before he was elected.

The SARS CoV 2 response will go down in history as the most blatant example of expert class arrogance and media malfeasance. Quoting from this piece by Stacey Lennox:

What is now at stake are the reputations of the scientific expert class, the Federal bureaucracy, the media, and virtually every big money interest, from the pharmaceutical industry to Silicon Valley to Hollywood. If President Trump gets four more years those special interests are suddenly not  going to be so special.

Where is the first place you heard about hydroxychloroquine? President Trump’s COVID update where he mentioned it and stuck by his belief, based on reporting by front line physicians, that it worked. Just last week the authors of a study published in the medical journal The Lancet that said treating coronavirus with hydroxychloroquine could be fatal retracted their findings.

Hydroxychloroquine cost $3.00 per treatment. Remdesivier, which doesn’t even work well, costs $1,400 per treatment and it has a patent. Do you believe big Pharma was not behind the coordinated assault on the effectiveness of a drug that was proved to work on SARS CoV1, which has identical modes of attachment with SARS CoV2? Maybe it was all a coincidence, what do I know?

One thing I know is the doctors in the Rio Grande Valley are using (but have run out of) Remdesivir. Hospitals in the RGV are considered by our government to be  “Hispanic Serving Institutions” which entitles them to lots a federal grant monies. They are rule followers to the nth degree and despite knowing hydroxychloroquine and zinc will work they are not about to do anything to jeopardize grant monies. So they use Remdesivir, but have run out of the stuff and are now using Tylenol.

Welcome to the revolution. On one side are the American people who believe in our founding principals that guarantee every American has equal opportunity for success. We’ll call them the Ameri- cans . On the other side are Americans who believe in the French Revolutions concept of equal outcomes for all. We’ll call them Ameri-can’ts. The Ameri-cant’s are rioting, claiming the country is inherently racist and all the ” Four Olds” (old customs, old ideas, old habits and old culture) must go . Have you ever heard of the four Olds before? Here’s a quick reminder:

The campaign to destroy the Four Olds began in Beijing on August 19, 1966, shortly after the launch of the Cultural Revolution.

The last crew to use the four olds killed millions of their own citizens. In America that is not going to happen because the one thing that democrat progressives cannot do is export their organic lunacy and blatant anarchy outside the urban centers they control. Unlike China (or any other country) we have the 2nd Amendment, you want to defund the police and place the responsibility for my security on me? I have no problem with that at all.  I am one an Ameri-can’s and most of us are well armed.

My prediction is the President will win by a landslide this November. This country is still majority Ameri-can’s and we bend our knee to no man.  The remaining weeks running up to the election are going to be painful to watch given the media’s continuing encouragement of rioting. And we may face the painful prospect of no NCAA football this fall  (I don’t watch or care about the NFL or any other professional sport).

If my prediction is wrong then we get to experience what happens when you try to force “equality in outcomes” (Jacobinism to the historically literate) to a country founded on the principal equal opportunity for all. A country where the citizens are armed and where trampling on individual liberties is not tolerated. I don’t think that will work so I hope for the best while not fearing the worst.