Texas historian T.R. Ferhenbach wrote that the Texans considered the United States “A  country grown so great even fools cannot destroy it“. That was then (back when Texas agreed to join the United States on terms most favorable to Texas). This is now, and now has serious, unsolvable, structural, problems inside our social order that will manifest themselves in ways none of us can anticipate. It is possible the fools of today may well be able to destroy the country.

We are being asked two believe, as John Hinderaker wrote in this post, that:

“… Joe Biden, a mentally impaired senior citizen who didn’t campaign, who rarely left his basement, about whose candidacy virtually no one was enthusiastic outside his immediate family, smashed all records by getting 81 million Americans to vote for him, 12 million more than voted for Barack Obama in 2008? Actual live Americans, voting legally, and only once? While millions of those same voters didn’t vote down-ballot, so that, apart from the presidential race, it was a good year for Republicans? I don’t believe it”.

Add to this the continuing attempt to avoid any admission of guilt by our ruling classes for ignoring the obvious fact that COVID 19, although lethal for 0.03% of the population, is no threat to the rest of us.  Our ruling classes know this which is why they routinely flout the laws they shove down our throats. This is a worldwide phenomenon that is impossible for any rational human being alive today to explain. Why have we ruined so much of our capacity and wealth for a disease lethal to less than 1% of the population worldwide?  Reasons. What reasons I know not, but it is gratifying to find yourself being that guy in this picture.

Now another shoe has dropped that may force me over the edge of reason and  into armed, open, revolt. They (the media in general, NYT specifically) have declared Tiki Bars are racist.

I have owned and ran one bar in my lifetime; a Tiki Bar in Jalalabad, Afghanistan that was the friendliest place in the world for people of all colors, gender and creeds (except Afghans). It was a friendly place because everyone was armed or came with armed guards. Armed societies are polite societies. In Afghanistan foreigners are allowed to consume alcohol but not Afghans which is why we had a giant screen TV room with WWE DVD’s. for the drivers and guards to use.

According to this article in the New York Times:

[A] new generation of beverage-industry professionals are shining a light on the genre’s history of racial inequity and cultural appropriation, which has long been ignored because it clashes with the carefree aesthetic. . . A new wave of industry professionals is reimagining these delicious contributions to cocktail culture, looking to shed the appropriation and racism that have accompanied tiki since its inception. . .  A recent movement aims to shift from the word “tiki” to “tropical.”

I know what you are thinking; the NYT is starting to suffer from TWS (Trump Withdrawal Syndrome) so they cook up some snarky bullshit about hipster bars, and then add that Richard Nixon liked Tiki Bars to dogwhistle the proles. You think this only about the people who runTiki Bars, but you’re wrong. First they came for the Tiki Bars and now they are coming after…..Coffee drinkers. 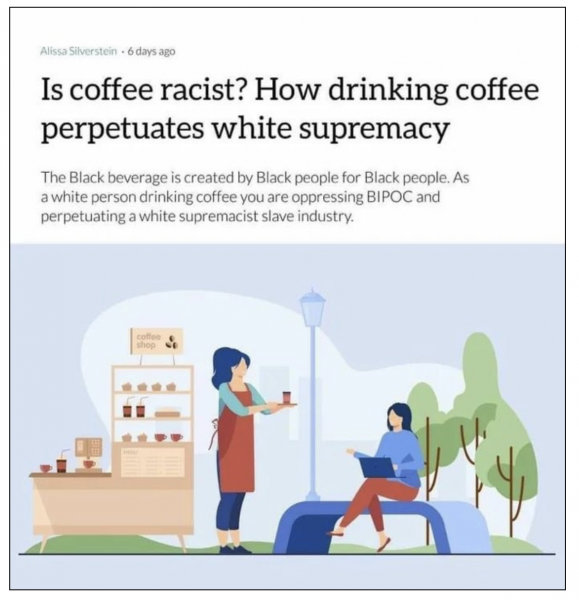 See where America is heading under the reign of Bo Jiden? We had an interesting year featuring a hysteria pandemic, a stolen election, and the complete collapse of confidence in the main stream media. Now we move into the next phase of our destruction from within by identifying every touchstone of the America we love and labeling it racist. Woke ideology festers in ignorant minds where it reduces the ability to understand reality. Rational people understand the graph below, woke people feel the graph threatens their physical safety and that they need protection from the information it portrays, because reasons.

As observable reality and the main stream media narrative drift further and further apart it will be interesting to see how the Normals of the fly-over muscular classes (VDH coined that term) react. Will the incubators of freedom in America (Tiki Bars) end up as my incubator of freedom ended up? Alone, abandoned, cold and lonely; labeled a racist by the New York Times, who never even sent a reporter to look into the coolest Tiki Bar there ever was? Check that, Matt Rosenberg stayed at the Taj when he was with the Times but he never wrote about it.

Tiki Bars represent freedom for all men because they are simple to erect, cost almost nothing, and are universally identifiable. My Tiki Bar was not only an oasis of freedom but it was also representing Australia, the MIT FabLab, Burning Man, Synergy Strike Force, the Golden Triangle Rotary Club from La Jolla,  and the United States Marine Corps according to the stickers and art work plastered on the coolers.

The assault on Tiki Bars is not the only assault on common sense there is also the mask problem. Not only are masks incapable of filtering out virus’s they are probably adding to the carnage as revealed by more “Science”. The results of a nationwide survey on the utility of masks was released yesterday and it contains bad news which means you’ll never read about it in the legacy media. It appears that mask wearing increases the likelihood of infection.

When comparing states with mandates vs. those without, or periods of times within a state with a mandate vs. without, there is absolutely no evidence the mask mandate worked to slow the spread one iota. In total, in the states that had a mandate in effect, there were 9,605,256 confirmed COVID cases over 5,907 total days, an average of 27 cases per 100,000 per day. When states did not have a statewide order (which includes the states that never had them and the period of time masking states did not have the mandate in place) there were 5,781,716 cases over 5,772 total days, averaging 17 cases per 100,000 people per day.

The reverse correlation between periods of masking and non-masking is remarkable.

The American people are finally catching on. With proper medical treatment a cold virus will last for only 7 days; left untreated a cold will clear up in a week. Seems like, for most who have been infected, COVID is acting like the other pathogenetic Corona viruses. As democratic controlled states head towards another full lockdown the proles are revolting. You can click here for an interactive map from Heritage.org showing 43 reported instances of local, state, and federal officials who violate their own coronavirus mandates, policies, or other restrictions.

We are now hearing about small business owners opening in defiance of ridiculous lockdown orders and being arrested for it.  In New York City bar owner Daniel Presti hit a sheriff deputy with his car breaking both of the deputies legs while resisting his second arrest for the crime of opening his business.  I support law enforcement 100% but not the members of law enforcement who bully citizens while enforcing edicts from on high while ignoring the laws of the land. The ” I was just following orders ” defense was used by Nazi’s to proclaim their innocence for crimes they supervised during WW II. That defense should stay in Nuremberg, it has no place in the culture of  American law enforcement.

When police start enforcing laws they know damn well are unenforceable, unconstitutional, arbitrary, and backed by woke ideology, are they still police? I’m not sure, I live in Texas where the police are not prone to  interfere with people out in public going about their business. I do know the most law abiding segment of society in the United States are concealed carry permit holders. It will take some serious abuse of our freedoms and liberties to get the gun owning public enraged to the point of using them; I can’t see how that happens at any scale in our large country.

The bars, restaurants, and small businesses in my town are open but struggling. The only arrest in McAllen related to COVID or BLM was a local man (that is code for Hispanic) who chased some BLM demonstrators (that is code for skinny white kids who do not live in the Valley) down Main Street with a chainsaw. He was screaming at them in Spanish, as you do in McAllen, but he then regretably  provided an English translation that included the dreaded N word. Normally the chainsaw and N word combo would have caused a Twitter meltdown and maybe protests too. But this is South Texas, we don’t play those kinds of games down here.

The proper way to view the incoming Biden/Harris adminstration is with amusement. When was the last time you heard a presidential administration referred to as the Prez/Vice Prez administration? Never. That has never happened before and is a sign of how pathetically weak Bo Jiden and advisors are on the eve of their accession. An administration that was not elected through legitimate democratic means has no incentive to act in legitimate democratic ways. Stand by for four years of furor and fun as the media tries to pretend Gropey Joe is alert and in charge while he allows the left to run roughshod over the American people.

Power doesn’t corrupt, it reveals. The power Bo Jiden has already exercised has revealed his character to be weak, flaccid, and corrupt. The power currently concentrated in democratic governors and congressmen has revealed them to be petty tyrants. Now they have access to more power with which to do…..I’m not sure, but whatever they do it will benefit them and their families more than it benefits you and yours.

We will never be able to vote these tyrants out of office because we no longer enjoy free, fair, elections in the United States. The progressives, knowing they do not have to compete at the ballot box, may well try to disarm us to take our attention away from the plunging numbers on Wall Street. It will never happen, anyone who thinks it is even possible is beyond deluded. As long as we remain armed the progressives will never be able to enforce too much of their anti-American, woke dogma on the rest of us. A man has to draw the line somewhere and defending needless slander against Tiki Bars is as good a place to start as any.