I opened a large package that arrived in the mail last week and out fell an encyclopedia sized book on leadership. There on the cover, larger than life, was Mike Ettore, who I served with in the Marines 20 years ago. He was staring off in the distance with a sense of purpose and the moral rectitude that one associates with famous men like Vince Lombardi. I was elated; my friend Mike Ettore must have become a famous football coach because who the hell is going to read 549 pages on trust-based leadership if there was no insight into how to approach a third and long with just seconds to go in some kind of game? I stopped watching the NFL over a decade ago, long before it was cool, so he could have been dominating there for all I knew.

I held it up to my wife and said, “hey I know this guy he must have gotten into football coaching or something and become famous”. 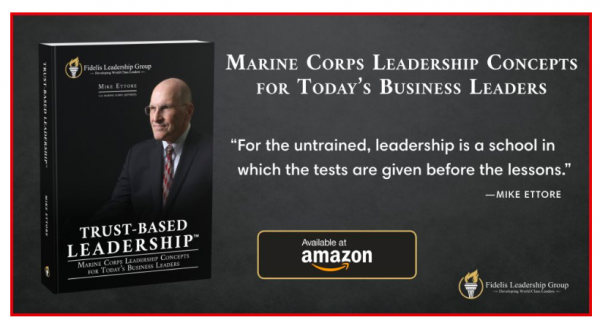 My wife held out her hand, she has a Ph.D. in organizational leadership and is an educator, so she knows the industry. She starts scanning the chapters and looks at me;

“Of course, he sent me the book, but I didn’t know he was a pro football coach”.

“He’s not, he runs executive leadership training and I’ve heard of his Fidelis Group; …. they’re out of Tampa”, she adds just in case I thought she was joking me.

I never saw the book again, off it went to her office and a week or so later I’m sitting at my computer doing writer stuff and up pops this notification from LinkedIn, a platform I rarely visit,  it’s a note from Mike Ettore asking if I got the book. I had to move a yellow sticky on my screen that said “send Ettore a thank you for the book” to read the notification.

I wrote to Mike immediately explaining the book had been highjacked (as if that meant anything) and then apologized for being a scumbag. I added I’d write a review on Amazon and retrieved my copy, but realized the book needed a blog post. Mike took the time to write what I consider the definitive book on leadership and it’s entertaining. I want to be entertaining back with the review.

Mike wrote this book as a text to be used for developing leaders in every human endeavor where there is a hierarchy. His biggest, dare I say controversial, contention is that leaders are made, not born. Coming from Mike Ettore that is hard to believe, at first, as is the idea that Marine Crops leadership doctrine can be injected, in any meaningful way, into a civilian business environment. I could easily see Mike as a successful, innovative, football coach because Mike was an exceptionally gifted infantry leader. But coaching executives on the importance of eating last? That seemed to be a bridge too far.

Mike Ettore, at age 20, after just two year in the Marine Corps, was a drill instructor at Parris Island. First term enlisted drill instructors are as rare as finding a diamond in a goat’s butt. Ettore left the Marines after his first enlistment to complete college and returned as an infantry officer. As a rifle platoon commander, he saw action in Grenada and Beirut making him one of the rare combat vets back in the 80’s and 90’s when we served together. As a company commander he won the Leftwich Trophy, an annual award presented to the best infantry company commander in the Fleet Marine Forces. An award that means little to most people but everything to an infantry officer.

When I met Mike, he was heading up the tactics department at The Basic School (TBS) which is a six-month course every newly commissioned officer of Marines must attend after their commissioning. TBS is designed to train new lieutenants in the art of leading Marines by training them how to be infantry platoon commanders. The Marine Corps takes the “every man a rifleman” thing seriously so every Marine, regardless of gender or military occupational specialty (MOS) is trained to fight as dismounted infantry.

I was an instructor at the Infantry Officer Course (IOC) and for reasons that need not be explained here there was friction between the tactics department and IOC. That ended soon after Mike’s arrival, he understood the difference between entry and advanced level fire and maneuver. He also understood our need to start at the squad level in an aggressive 10-week course that had over twenty, increasingly difficult, live fire events.

Drill Instructor at 20, rare combat leadership experience as a Lieutenant, winner of the Leftwich as a Captain; one would think Ettore is one of those hard asses who insists on blind obedience to regulations and strict attention to orders. He’s not and that his the first of many family jewels in the Marine Corps leadership doctrine revealed to readers who did not enjoy the opportunity to experience them firsthand. Despite what you have seen in movies or read in books a successful Marine infantry leader can only be successful if his troops respect and love him.

Not every man who passes through the Marine Corps leadership training pipeline masters the nuances of infantry leadership. There are both bad leaders and bad units in the Marine Corps as there are in every large organization. I’ve always thought bad leaders were missing an ingredient the successful leader obviously enjoyed. In other words, I thought good leaders were born to the task.

Readers who are not familiar with the military in general or the Marine Corps specifically will be overwhelmed by the exacting standards of Marine Corps Leadership. You will be dubious at the contention that the Marine Corps instills these traits and principals in young men and women who have just completed High School.

I have a short cut to understanding the dynamic, but it’s a little long. Listen to this 4-hour 15 minute Jocko Willink podcast about an incident that played out in less than 10 seconds; 15 years ago, involving a young Marine Corporal named Jason Dunham. Jocko is joined by four Marines who were with Jason that day. They explain who Jason was, how he became a squad leader at such a young age, his training for Iraq and the events leading up to the day he was mortally wounded. All four of the Marines and Jocko lose their composure several times during the discussion. It is fascinating listening;  a truly inspiring tale about an iconic Marine Corps small unit leader.

Executives in the civilian business world do not lead men in mortal combat so what does the leadership system designed to do just that have to do with running a for profit enterprise? Everything. The Marine Corps trains to fight but combat is not where any Marine spends a majority of his career. Unlike Mike I am not a combat veteran, but I have seen infantry battalions fold in the field after 96 hours of cold, wet, wind driven rain in the normally sunny Southern California winter.

Every leader faces diversity and it is through navigating that diversity that effective leadership is demonstrated. This seems to be a self-evident truth that is often absent in today’s business and social environment. I suspect that is because leadership training is confused with leadership techniques and procedures. Good leaders work by developing and implementing effective techniques and procedures, poor leaders mimic the techniques but never achieve the same results. Tactics and techniques cannot be substituted for leadership if you are in a dynamic environment where rote routine and detailed instructions are counterproductive.

I take that back; Amazon fulfillment centers have got to run on rote routine, I would think, and if the management of those centers adopted Mike’s approach to the tasks at hand I doubt the media would be full of stories about dismal employee morale.

If you are in the military and aspire to a leadership role at any level, buy this book, read it, highlight it, and then read it again, and again, and you will accelerate through the ranks at a blistering pace. If you are a Marine Corps Officer or SNCO and have not ordered this book yet you’re wrong, so fix that quickly. For everyone else I am telling you that this book will make you a more productive leader and better human being if you accept the challenge Mike has laid out for you.

When you read and understand this textbook you will know exactly how to develop and manage human capitol.  Mike Ettore has distilled 244 years of Marine Corps Leadership guidance and doctrine into one book designed to be used throughout a career of ever-increasing responsibilities. If you desire to excel in any leadership role this book will grow your talent stack exponentially. If you put the work in to master the material and make the effort to mentor and develop your subordinates.

As I said in the beginning not everybody who is exposed to Marine Corps Leadership doctrine gets it. Those that do become legends, everybody likes being associated with a good solid leader. Now there is a book to tell you how to become one. If you have the drive and the desire to work at it. Nothing worth having comes easy in life.