The Rio Grande Valley consists of four counties Cameron, Hidalgo, Starr and Willacy. The population is almost 90% hispanic, and the majority of the folks born and raised here, whites included, speak fluent Spanish. Despite the prevalence of Spanish speaking It’s still an unmistakably American place. The infrastructure is new as the population has grown significantly over the last 20 years. The VA system here is excellent as military service is and always has been popular with South Texans. 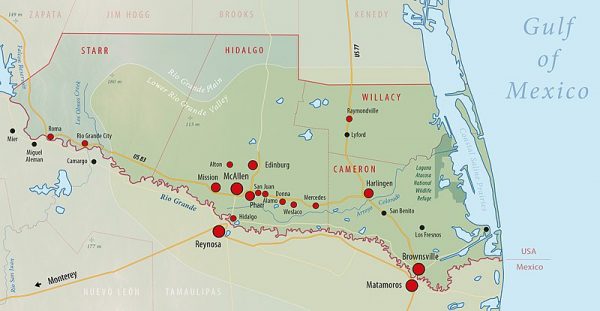 The migration pressure on the border comes from Central Americans who muster at collection points on this side of the border for speedy processing. Once processed and released they are taken to Catholic Relief shelter, given food and a bus ticket to the interior and dropped off at the Greyhound station. Mexican citizens can cross the border and stay in the valley as long as they want but they can’t go inland without a visa. A significant percentage of the local economies in cities like McAllen comes from Mexican tourism, especially during Christmas and Easter.

The McAllen/Edinburg area has a serious public health problem; we are (according to a recent Grub Hub ranking) the fattest metro area in the United States.  Morbid obesity leads to type II diabetes and hypertension, and all three are the principal comorbidity factors contributing to fatal outcomes from COVID-19.

The counties have all issued shelter in place orders and masks must be worn in public except when exercising. Cameron County has issued the most draconian mandates which include prohibiting more than two in a vehicle, which will be a problem for lawn maintenance crews, and children under age 14 have been confined to quarters. These measures are exactly the wrong ones to take if we are concerned about the health and welfare of our fellow citizens.

One of the known characteristics of COVID-19 is that hypertension, diabetes and being overweight dramatically increase hospitalization and fatality rates. It seems to me the perfect vehicle for public health officials to attack the epidemic of obesity in the population. If there was ever a time to start messaging about the necessity of a balanced diet combined with regular outdoor exercise that time is now.

Instead local officials have done the exact opposite. When the schools and non-essential businesses closed the local parks and play grounds were active. They were not crowded, there were no social distancing issues, but you would see groups of half dozen cross-fit folks working out together, families using the picnic benches, and others running or using exercise stations.

I would think the city leader would be encouraging people to get out of the house and into the many city parks to let their kids burn up some energy. Instead the city placed barricades around all jungle gyms, removed every picnic bench, closed all the park parking lots, and made it clear it doesn’t want people exercising in the parks.

Remember the purpose of flattening the curve was not to shelter in place until the bug was gone, the assumption that we will all eventually be exposed remains in place. If we are all going to get the bug eventually should we not be strengthen our immune systems now when we have all this time on our hands? Getting people, especially children, outside and active strengthens immune systems. Being immobile and sedentary indoors, passively watching television while eating highly processed food decreases immune systems.

The local hospitals are empty so the curve has flattened which was the purpose of social distancing and mask wearing. Now that we accomplished the goal of the shut down why are we continuing the shut down?

The reason to open the economy is it will save more lives than it will cost.  There is little question that the lives lost to the economic catastrophe following an extended shut down and collapse of the economy would dwarf the numbers of lives lost from  COVID-19.

The alternative to relaxing the quarantine and allowing the virus to run its course is to remain locked down until there is a vaccine or cure. This is why prominent health policy types like Dr. Ezekiel Emanuel are talking about an 18 month lockdown. That is flat out insane. How can American look herself in the mirror and call herself the land of the free without NCAA football this fall? The question answers itself.

One Reply to “Apocalypse Not #8 South Texas Lockdown”