Last week, Kanani Fong of the blog The Kitchen Dispatch, arranged an interview for me with Tim Hetherington, who along with Sebastian Junger produced the award-winning documentary called “Restrepo”. Kanani signed onto the Restrepo team to spearhead a public relations effort, in conjunction with National Geographic, to get the film released nationwide in theaters. This is no easy task for a documentary but, as many of you know, there is a huge groundswell building in the blogosphere over this movie and it is already scheduled for runs in major cities around the country.   This is great news because the one thing Tim stressed in our interview was this is not a film just for the military, but for the general public. In the minds of the men who made it, this film is designed to show Americans who have no direct stake in this fight (which is the vast majority) what is being asked of the men and women who are bearing the brunt of battle. 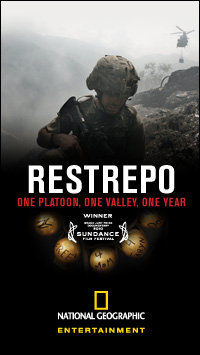 My conversation with Tim Hetherington was really enjoyable. Our Skype connection was crystal clear and we got along like old friends. Tim and I had such a great time chatting with each other I never got around to doing any interviewing. I know that sounds strange, but we were having such a great give and take about all kinds of things that I asked very few direct questions about the film.
Both this film and the related book War by Sebastian Junger are valuable additions to the special niche in military history dealing with the effects of battle. This type of historical writing was made popular in 1976 by the historian John Keegan when he published his classic The Face of Battle. I loved that book and remember being enthralled by the descriptions of battle – especially his telling of the famous Agincourt fight where English bowmen took out the leading Knights of France. The Knights were encumbered with over 60 pounds of body armor and, when they dismounted their horses, essentially immobile and helpless. I remember talking about this book with my peers, laughing and laughing at the stupidity of going into battle wearing over 60 pounds of body armor. I guess the joke was on us, since my peers now routinely go into battle with more than 60 pounds on their backs. Thanks to ergonomic advances, they can move a little better and react slightly faster than the doomed French nobles at Agincourt….but that’s not the point is it?
Which brings me to the only real question I had for Tim, and it was an unfair one: why does it seem that the Army never tried to preempt the routine attacks on Restrepo and the other FOB’s? Apparently, they generally knew when attacks were forming and the attack positions used by the Taliban never changed, because they couldn’t change…mountains limit your options for good fields-of-fire.

I was taught that fire without maneuver was a waste of time, effort, and money. It still seems strange to me that the reaction to an attack on a FOB or the ambush of a convoy is to shoot back with long range fire, call in airstrikes and then go back to what you were doing before the Taliban started bugging you. I liked the way we used to do these things, which was to gain and maintain contact until you could maneuver on the villains and destroy them in detail. It is a poor idea to provide on-the-job training for your adversary.

Tim pointed out that the Army did run a preemptive operation which is a critical part of the film and book, called Operation Rock Avalanche, but the question really wasn’t a fair one. Both the film and book are focusing on the experience of a single platoon during an entire  combat rotation. Platoons execute orders from on-high and have little to say about operational planning. I already knew the answer to the question I was asking and found this quote later which seems to best express why the men in Restrepo fight the way they do. This quote is from The Father of Us all by Victor Davis Hanson:

“Consequently, emphasis on defense – from body armor to antiballistic missile systems – will become an ever higher priority, as ever more affluent Americans, like Greek hoplights or medieval Lords of old, grow increasingly sensitive to the casualties of war. The current weight of fifty to eighty pounds of gear that so burdens individual soldiers is not so much to provide them with additional offensive power as to achieve better communications, body protection, and survivability.”

The men in Restrepo were executing with skill and determination the orders they had been given. It is still amazing to me that guys can move and fight as well as they did, given the loads they were carrying in a high altitude, mountainous environment. Their attempts at tribal engagement did not pay off in the long run. We no longer staff FOB’s in the Korengal Valley, but these guys gave it their best shot, which comes through clearly in the book as well as in the movie.

In my opinion, it is important that this film be shown in as many theaters as possible. Most of my regular readers know this tale intimately and will appreciate the artistry in this tale about infantrymen in war. Most Americans as well as most people in the countries with troops deployed here, do not have a clue about what they collectively have asked their fellow citizens to do. The amount of responsibility placed on the shoulders of twenty-something year old (or sometimes younger) men who lead fire teams, squads, and platoons, exceeds by several orders of magnitude, the burden placed on their peers in the civilian world. Once they are home and out of the service, it may be decades before they are placed in positions of such responsibility again. Add to that the burden of survivors’ guilt, which is common to all veterans at all times and in all places, and one gets a sense of the overwhelming pressures being shouldered by these veterans at the pointed-end of the spear. Americans need to know this because when our elected leaders send these soldiers to fight for our country they do so in all our names. We owe it to all the men and women who serve in harms’ way to understand what we asked them to do.