Kharejee is a word used in both Pashto and Dari for foreigners. Afghanistan has a long history of welcoming Kharejee to their lands as long as they weren’t members of invading armies. When westerners arrived in force back in 2002 they weren’t, initially, considered invaders are were welcomed in most places by most people. Unfortunately the kharejee are not too welcomed anywhere in Afghanistan today.

Last weekend a western NGO, Operation Mercy, out of Sweden was attacked; their Afghan security guard decapitated, a German aid worker killed and a Finish aid worker kidnapped. Both of the Europeans were female which, in days gone by, would add to the sense of outrage in the West. They were probably targeted by the Taliban (given the decapitation) but could have been victims of a kidnapping gang. Regardless of motivation the kidnapped victim stands a good chance of surviving her ordeal if her government steps in and quickly ponies up some serious cash.

Which raises the question why the German woman was killed? She was worth a lot of money alive and nothing dead. My educated guess is she armed herself with some sort of bludgeoning weapon and tried to fight back. Some of the German NGO women I saw working in Afghanistan weighed a good bit more than your average Taliban and could have beat the stuffing out of them with a baseball bat.

Fighting back is not the best option in this kind of scenario but it’s what I would have done. It is also why disarming us Kharejee was stupid. Armed expats have stopped these types of attacks in their tracks several times in years past. Armed westerners have been killed by bombs in Kabul but only one was killed in a ground attack. He was working for the UN and was credited with saving 17 of his colleagues although he was badly wounded in the process. The wounds he sustained didn’t kill him, an Afghan police officer did by shooting him at point blank range. 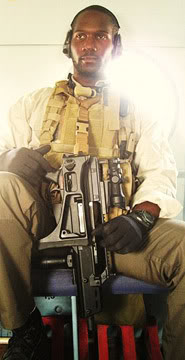 Former American sailor or Marine – reports on his past differed Louis Maxwell with his H&K G36 rifle. The flame stick was stolen after he was killed by ANP officers responding to the attack on the guesthouse he was protecting. Louis Maxwell is a true hero and like most true heroes he will never be recognized, remembered or acknowledged. But I remember him nightly in my prayers and hope I’m not the only one.

It could be worse for the Finnish worker: if ISIS-K grabbed this woman there will be no getting her back.  ISIS fighters don’t do ransom – they do blood work in the name of Allah. If they have her stand by for the orange jump suit and decapitation video.

German journalists Sandra Petersmann and Birgitta Schülke-Gill did some interesting reporting after the latest attack by asking local folks about their opinions on NATO sending in more troops. The responses they got were consistent with common sense which is the exact opposite of what we are hearing from our leadership concerning the need for more troops. Here’s an example:

“What good will more foreign soldiers do if they’re not allowed to fight?”

I believe the answer to that question is obvious.

What is also obvious is Kabul is a very dangerous city for Westerners today. Yet the NATO’s Resolute Support Public Affairs office insists that journalists who want to embed spend multiple days traveling back and forth to the Ministry of Interior (MoI) in Kabul to get credentialed before embedding. I have no problem doing that as I have many places in Kabul where I can go to ground surrounded by friends I know will protect me.  There are a handful of Western journalists who could do the same.  Any journalist without years of in-country experience and a tight support network will be in grave danger if they attempt to embed. This is the reason we will be getting very little reporting from the country in the coming years.

What are the chances that elite American journalists, the type you see on TV frequently, are required to expose themselves to this level of risk? I think it zero but hope I’m wrong. The point being that Resolute Support is resolutely refusing to acknowledge the current ground truth. You would think, given the reluctance of NATO countries to commit more manpower,  some reality would work its way into their media plan to enable more reporters in-country to tell their story.

In other disturbing news the Afghan National Security Forces (ANSF) lost 20 men in a series of attacks on static checkpoints. They are going to lose a lot more because static checkpoints are easy targets to isolate and destroy. That the ANSF continues to use them indicates our advise and assist efforts over the last 16 years have yet to bear fruit. The National Directorate for Security, which are the MoI’s secret police have, for years, established flying checkpoints that are a much more effective way of screening traffic for villains and gathering bribes. I wrote a post about one where I lost two sets of irreplaceable body armor and that post made it into Soldier of Fortune magazine.

The continued use of static checkpoints indicates that ANSF soldiers and commanders are impervious to reason. How much mentoring would it take to get them to use mobile checkpoints that vary in time and location? I’m not sure but believe that 16 + X number of years will not be enough. ANSF will continue to sustain unsustainable losses because they insist on being sitting ducks.

Habits are hard to break, even when it is a reasonable assumption they will get you killed.  It is difficult to see how more advise and assist trainers will turn the battlefield momentum. It is also difficult to see how this will end in an acceptable state of affairs. Time is not on our or the Afghan peoples side.

But I’m still on their side because I know too many Afghans who are decent, caring people and they need some moral support. Besides being in dangerous places is invigorating to me. Since my return to America I’ve discovered I’m a type II diabetic. The only dangerous thing I do now is to let my toe nails grow longer than I should.  So, once again, I pull out the big threat: 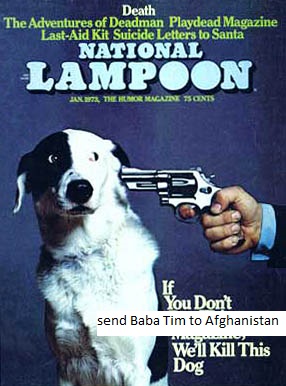 If you have the means and interest please donate to my effort to embed at the the Baba Tim Go Fund Me page. Without accurate, informed reporting our ability to help is going to become seriously limited.