In a blunder too stupid to contemplate let alone explain the US Special Forces Information Operation (IO) team in Afghanistan designed leaflets that contained the Shahada  “There is no God but God, and Muhammad is his prophet” printed on the side of a dog.  Dogs are considered unclean to adherents of the Islamic faith; placing a Shahada on the picture of a dog is a grave insult to the faithful. In fact it is so grave that there will be no way any Afghan will believe this to be a simple mistake. This is an amateur hour self inflicted wound that for which we will pay a stiff price….take that to the bank. 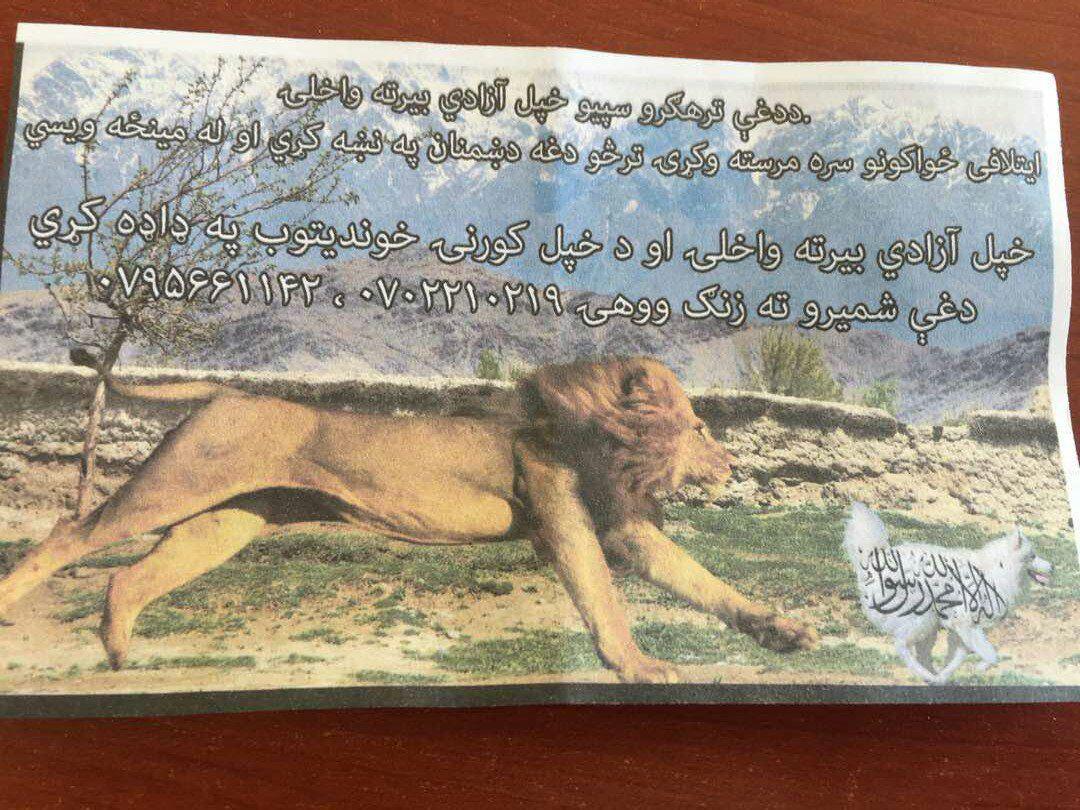 The leaflets were dropped over Parwan province (I’ve also seen stories that it was dropped in the northern provinces) which has a literacy rate of 27% and most of those Afghans are Dari speakers. The leaflet is in Pashto – the language of the southern provinces.  The Taliban were quick to respond sending a suicide bomber to one of the entry control gates at the Bagram airbase yesterday where he detonated his vest and wounded six soldiers (there of them Americans) and killed an interpreter.

The American military had this to say about the incident:

I sincerely apologize. We have the deepest respect for Islam and our Muslim partners worldwide,” said Maj. Gen. James Linder. “There is no excuse for this mistake. I am reviewing our procedures to determine the cause of this incident and to hold the responsible party accountable. Furthermore, I will make appropriate changes so this never happens again.”

Regardless of what the review of procedures reveals there is no way to explain such a reckless mistake after 16 years of fighting in Afghanistan. All this incident does is to reaffirm the wisdom of the Prince plan which focused on getting knowledgeable trainer/mentors into the country for the duration. What general Linder is going to find is someone on his/her first deployment thought this leaflet a good idea. Which is to say someone doesn’t know a damn thing about the country of Afghanistan yet is running IO ops there. The Prince plan specifically avoided putting inexperienced people in country to avoid self inflicted wounds of this nature.

Why dropping leaflets in a province where a vast majority of the population in illiterate seems a good idea at this late stage is a bigger issue than the content. It speaks to another component of the Prince plan and that is not having people in country who do not complement the mission which we have been told is training the Afghanistan National Security Forces. This is the problem with the American military today; it is a gigantic bureaucracy designed to fight the military forces of other nation states. After 16 years of fighting in Afghanistan it is still unable to task organize into a force that reflects it’s stated mission.

Adding insult to injury former Afghanistan president Karzai took to the press accusing the U.S. of launching “a psychological war against the Afghan people”. He is correct; that is what exactly what information operations are designed to do and there is no reason for us to be doing them in Afghanistan.

Misfires of this nature are part of “a cyclic pattern to the erosion of faith in government, in which politics saps the state’s capacity to protect people, and so people put their trust in other institutions”. That quote comes from an article in the New Yorker about Hurricane Harvey yet explains well the reason Private Military Companies (PMC’s) remain a viable business model in the face of unanimous condemnation by international elites.

Titled Why Does America Need a Cajun Navy? the article, in the words of Richard Fernandez, expressed alarm that “the Texas disaster instead of emphasizing the importance of Climate Change and greater government funding has perversely glorified community volunteerism with deleterious effect”.

What the New Yorker was describing and what the world witnessed in the aftermath of Hurricane Harvey was the high degree of social capitol resident in America’s fly over country. The Cajun navy is a reflection of that social capitol as was the hundreds of people who launched their boats onto the flooded roadways and started saving people. 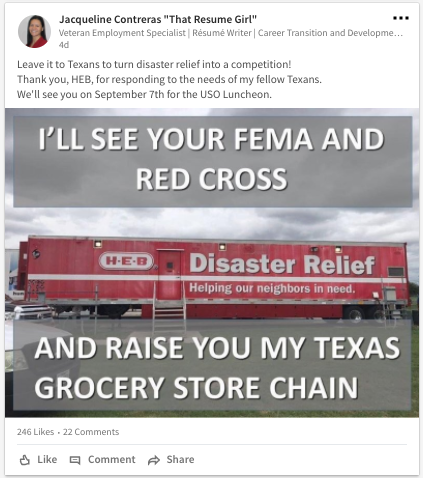 Texas also enjoys the advantage of their own giant grocery store chain HEB. HEB is legendary for its disaster relief response. Instead of doing typical corporate IO buys on TV and radio which claim the company is doing this or that for the community HEB goes out and helps the community. They fly in truck drivers to keep stores open, forge letters to get clean up crews past police roadblocks to get stores open; even plead with national suppliers: from the linked article:

I called Frito-Lay and said, rather than manufacturing your entire product line, manufacture your bestsellers. I need Lay’s, I need Doritos, I need Fritos. I need a variety pack. I don’t need Funyons and I don’t need Munchos. Just make your best sellers. I won’t turn down any delivery. We’ll take it as fast as we can.

I don’t need Funuons….that’s hysterical…anyway the point is that the response to Hurricane Harvey demonstrated that Americans, despite years of racially polarizing IO operations from our politicians, academia, elite media and even the damn NFL we remain Americans. We’re a big country with people of every variation of color and ethnicity you can imagine who come together in times of strife to take care of each other because it’s the right thing to do.  Listen to some of the Zello calls to the Cajun navy to get an idea of what I’m talking about

We are about to see how much social capitol remains in the state of Florida. Florida has more cowboys (and cows) than Texas; but it has also seen a huge influx of life long democrats moving into the state from frigid northern blue states. This is why we have odious, ethically challenged congress persons like Debbie Wasserman Schultz on the national stage. She is a second rate hack who has the audacity to claim her support for the Awan brothers (the biggest political scandal of my life that is being studiously ignored by legacy media) is a victory of diversity and a blow against racism. Unhinged lunacy of that nature is why I suspect Florida is lacking in the human capitol department. People who elect the Wasserman Schultz’s of the world are not the kind of people to risk their lives or property helping strangers.

Diversity has never been a strength to any society at any time in history. As Victor Davis Hanson points out:

Is Florida a successful melting pot or a dangerous salad-bowl of politically sanctioned, envy driven separatism? We shall soon see.

Right now the evacuation efforts in Florida are being stymied by a lack of fuel. The governor has been brow beating suppliers about getting more and is urging citizens to not top off their fuel tanks if they don’t need to drive that far to local shelters. Does anyone on planet earth believe that will happen? He can hammer away at fuel suppliers all he wants but he won’t get far. The Colonial Pipeline that carries 100 million gallons of gasoline, aviation fuel and heating oil a day from Texas refineries to the east coast is closed.

Wait…a pipeline carries 100 million gallons of gas a day from Texas to New York? Doesn’t that make all the drama surrounding the Keystone pipeline rather moot? Yes it does and it illustrates the disservice being done to our national discourse by the legacy media and virtue signalling politicians rather obvious. America can and should be energy independent; for years the oil and gas industry has been asking to expand both pipelines and refinery capacity yet congressional democrats, blue state politicians and climate alarmists have worked in tandem to prevent those investments to our energy infrastructure. That is another self inflicted wound that is already impacting Florida and may well impact the other states in the south who are in the path of Hurricane Irma.

As the cheerleaders for climate alarmism take to the airwaves to tell you how ‘climate change’ is responsible for the intensity of the current hurricane season remember the graph below. Climate models that have their inputs artificially tweaked are not reliable. Legitimate scientific observation is as are your own two eyes. 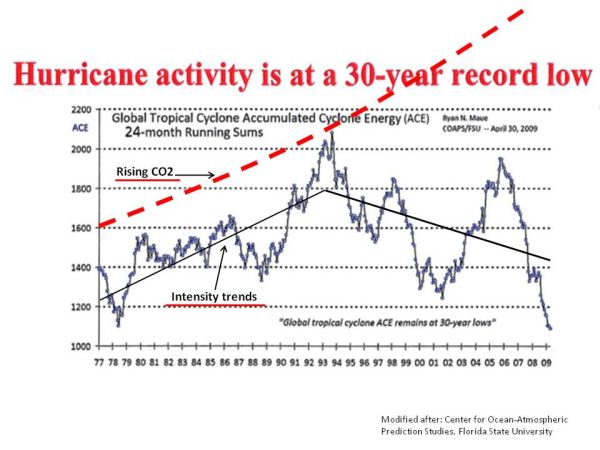 Most Americans, just like most people in other parts of the world, do not like to wait for the government to swing into action when a natural disaster strikes. The effectiveness of the help they can provide to their fellow citizens is a direct reflection of the social capitol that resides within the affected areas. Let us hope and pray that the citizens of Florida are able to put aside petty politics and rise to the occasion. Their test is at hand; the rest of the world is watching and we will soon know if the blue state model can match the red states in human decency and real (vice virtue signaling) compassion.

One Reply to “Self Inflicted Wounds: Dogs and Hurricanes”