In the book The Operators by Michael Hastings there is a quote from Command Sergeant Major Michael Hall comparing General Stan McChrystal to John Paul Vann. John Paul Vann was a former army officer who went to Vietnam as a soldier and stayed on working as a Provincial aid advisor. He was famous for his ability to drive around and live in contested districts (alone) and was a tireless advocate for the Vietnamese people. He was also a compulsive womanizer, an alcoholic, and  a shameless self promoter. Remove those negative traits, replace them with a typical all-American Midwest kid raised in a stable two parent household where he developed a strong sense of commitment, a bias for action combined with the ability to thrive while taking calculated risks, and you have Chris Corsten. He was the John Paul Vann of Afghanistan

Our two-decade long involvement in Afghanistan has been a fiasco. Every aspect of our performance had major issues, none more so than the herculean efforts at re-building and rehabilitating the war-torn infrastructure. Yet buried deep inside the legacy of failure are stories of remarkable success. Carter Malkasain described one example of competent development leading directly to local prosperity (briefly) in the book The War Comes to Garmser.

Another example has just been published by my friend Chris Corsten detailing his decade in Afghanistan working both as a soldier and heavily armed humanitarian. The book is 3000 Days in Afghanistan, but I need to reveal something that you will not glean from Chris’s writing. In the world of outside the wire contractors, men (and a few women) who worked in contested districts infested with Taliban, who lived in local compounds, drove local cars, rarely spoke English outside their compound, wore local clothes and lived off the local economy to deliver massive aid projects on time and on budget, Chris Corsten was the best there ever was.

Chris stayed the longest, he had the most impact, he did, by orders of magnitude, the most projects and he was a shura ninja when it came to working through problems with tribal elders. Chris Corsten is a legend – to those of us who knew what accomplished and also to thousands of Afghans who became self-sufficient as hundreds of thousands of acres of farmland became productive again thanks to his irrigation programs. 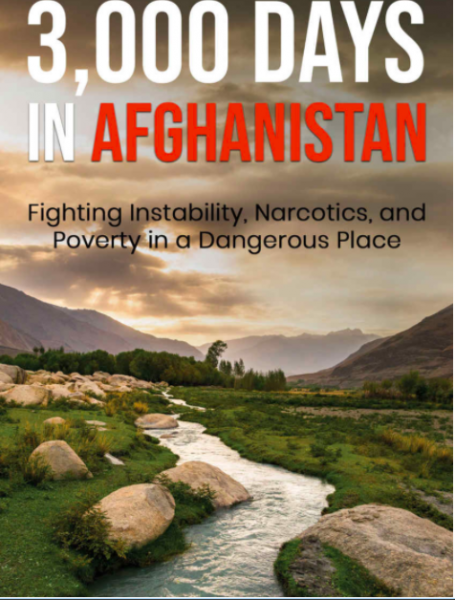 The book is a clear reflection of Chris and if you know him the two personality traits that stand are conscientious and integrity. Those two traits were combined with an attitude that was the common denominator among all of us working outside the wire; zero tolerance for wasted efforts, make work stupidity, and excuses. Add to this mix the fact that Chris is a modest man who is not prone to exaggeration, routinely attributed all success to his subordinates, and loathes the idea of self-promotion and you have a writer who is going to lay out the facts. Which he does in a manner that is almost business like.

As you get towards the end of this remarkable story Chris lists the spectacular amount of work accomplished during the 2010-2011 surge, and if you know what was going on then in Afghanistan, it is easy to get confused. It seems impossible that Expats (mostly American, British, South African and Australian) were living and working in local Afghan communities while supervising massive irrigation projects in districts where the military was sustaining casualties on a regular basis.

If you don’t know much about Afghanistan, you can read through what Chris accomplished and miss what he accomplished. If you don’t know what was happening in provinces like Khost, Kandahar, Paktia, Kunar, Helmand, Farah, Nangarhar, Herat etc… in 2010 it is hard to appreciate the feat of finishing every project you started with supervision by expats who were out and about in Taliban contested areas daily.

What Chris and his crew proved was aid in contested areas can be delivered effectively, but it has to be done by guys who know what they are doing and have skin in the game. And, at least in Afghanistan, they needed to be armed.

Let me explain the weapons. Our model was if you can’t be safe be hard to kill. The threat to outside the wire contractors took many forms. The biggest was getting kidnapped, the other major problem was we had to store, transport, and distribute large amounts of cash. You are not safe when you are living in a local Afghan compound that contains a safe with over a million dollars in cash. You are not safe when you go to the local branch of the Kabul Bank and withdraw $700,000 for your monthly project payroll. You have to know what you are doing to convert $700,000 in Benjamins into small denomination Afghani’s.

Not all of us carried firearms either – Jeff “Raybo” Radan, a former Marine infantry officer and Ranger School graduate (thus the Raybo call sign), worked a year in the Helmand and never carried a weapon. He did projects in contested towns like Now Zad but being a former Marine he knew how to get a ride on Marine air and thus was able to travel safely. But most of us were armed, and all of us had weapons, including belt fed machine guns (in some provinces), inside our living compounds. Our arming authority came from the Provincial governors and if we ever used our weapons, we were accountable to them as well as the US Embassy.

Chris explains why former, experienced, military men, who have already acquired knowledge of local atmospherics and a solid understanding of local culture, are the best option for staffing aid programs in conflict zones. All the men mentioned in Chris’s book (he uses assumed names) were prior military and all of us had years on the ground before we were able to transition into what I term “Free Range” contracting.

3000 Days in Afghanistan should be required reading at both US AID and the Department of State as they sift through 20 years of lessons learned in Afghanistan. This week a senior USAID executive, who had extensive Afghanistan time, released a paper titled USAID Afghanistan: What Have We Learned. He concludes his assessment with four lessons;

All four of these lessons are addressed in detail by Chris as he explains how he avoided graft, corruption, security services shake downs, how he dealt (effectively) with theft, and delivered aid that was meaningful while injecting cash directly into local economies. The added benefit of taking Taliban off the battlefield by exchanging a couple months of hard labor for a decent amount of pay was something we discovered early in the program but had not anticipated.

Chris throws no stones as he explains what we were doing and why we felt we should do more. He describes his disappointment at not getting traction with USAID and the State Department and then moves on. The program he was running got plenty of attention in the press at the time. There were NPR radio interviews, 60 minutes segments, multiple magazine articles including this classic account in the Toronto Star about our team in Kandahar. The FRI blog was booming back then as I documented our massive infrastructure projects in Nimroz province. In the end none of that mattered, it turns out being successful where everyone else is failing can be problematic.

As William Hammink admits in his review of USAID in Afghanistan, we threw too much money into a country that could not absorb it. What is now obvious is that Chris Cortsen showed USAID exactly how to do Afghanistan aid. Spend a few years and a few million dollars to get all the irrigation systems back up and running, build a few schools, pave a few roads, bring in engineers with some commercial demo to blast rock and build runways in remote mountain-top towns, and you have done about all that should be done to get the country heading towards self-sufficiency.  Then you can leave.

3000 Days in Afghanistan is an easy read about a remarkable guy who sticks to the facts to make a case on how sustainable development in conflict zones should be done. Buried behind the facts and the business-like narrative are the stories that someday will emerge from this program as historians start to comb through the records in the search of what really happened in Afghanistan. They will find plenty about Chris, hopefully telling  his story in rich detail. There is a lot there and although Chris may not be seeking recognition for what he accomplished he certainly has earned it.

5 Replies to “The John Paul Vann of Afghanistan Speaks”