Editors Note: This post is written by Amy Sun the MIT team leader for the Jalalabad FabLab.

A lot is going on in the Taj Fab Lab and it’s pretty exciting. The lab was deployed quite recently – equipment and I hit the ground in June 2008 – so expectations from all of our supporters and critics alike were quite low. Nonetheless the lab has already seen tremendous activity and growth in meaningful ways, even during the long slow ramp-up. We’re having some angst over long term support and funding but for the moment at least activity in the lab is exceeding expectations.

Each day approximately 45 users come to the lab and patiently deal with power and network and other issues and have been cranking out simple projects in staggering quantities. They have self-organized a system where some of the more advanced students hold classes and workshops for newer or less advanced users. There is a mix of genders, ages, background, ethnicities, and economic status. 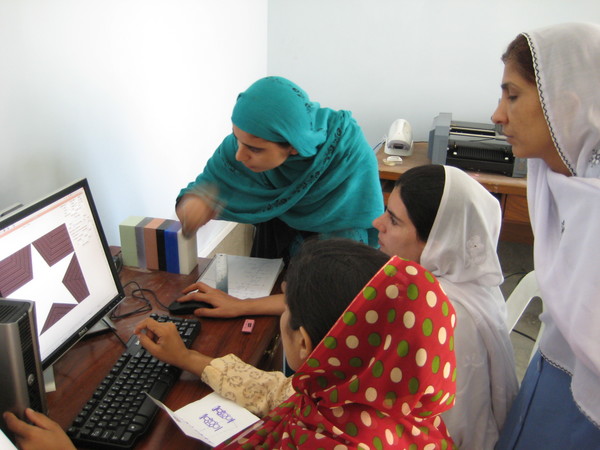 In January I and 5 other internationals will be in Jbad to kick off two self sustainability projects. The simpler of the two is for the fablab to organize a club where members make and sell customized things like t-shirts, trinkets (ie, challenge coins), vinyl stickers, signs, etc. all of which are run in way to pay users to learn to use machines very well and carefully. Additionally they will learn about simple accounting and business concepts. The club has something like a forced graduation when the user becomes very good at a particular skill, but first the person serves as a mentor for another incoming novice apprentice in any given skill. Generally speaking the users have been cranking out astonishing quantity but the quality is poor and there are few users who see the point to going back and making everything perfect since it’s all just play anyway. So I hope that needing to meet quality specs in order to get paid will make them sufficiently motivated. Some users are very talented but have no reward path for their talents. 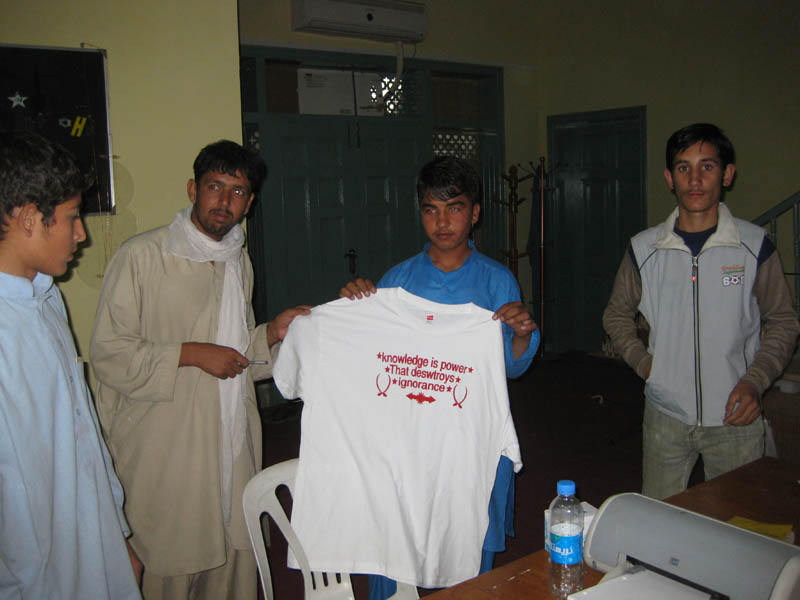 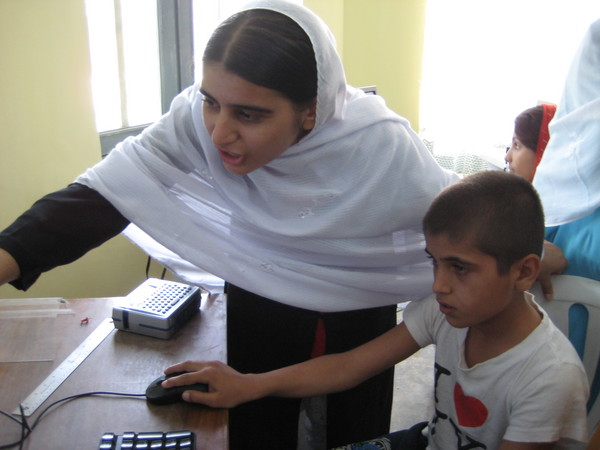 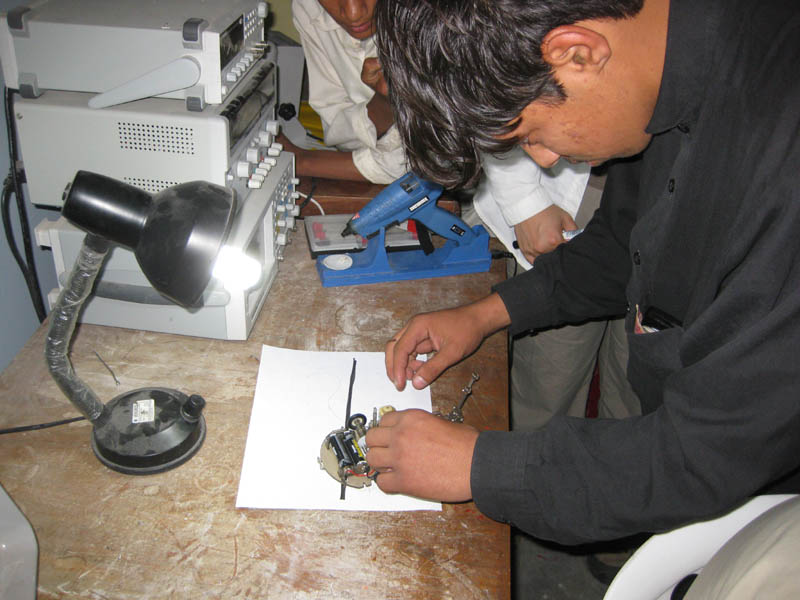 The second project, much more ambitious and complex, is to stand up something like an IT services company out of the fablab specifically to do with point-to-point long range connections with equipment fabbed in the lab (and later meshed networking also fabbed in the lab) as well as intranet support. Here we’re (informally) working with Cisco and the members of this club could become Cisco network certified and instantly highly employable in the Jbad area. We aim to provide local Afghans the knowledge, skills, and access to the machines to make equipment to push the edges of the network as well as have actual real-world systems to learn and apply their just in time learning. Just as importantly, they’ll be paid as they learn and not paid if they don’t perform. It’s this project that we’ll mostly be focused on in our January trip. We’ll be making, installing, and configuring several point to point connections with at least a 1 to 1 Afghan to international ratio where our goal is for the Afghans to be doing all the work by the last pair and for them to continue on as owner-employees of this company after we leave. Follow along at the temporary site: http://fabfiwireless.blogspot.com/ (this URL will change within the next two days as we bring our server and services online so don’t bookmark it).

Some of the earnings from both the above will come back to the fablab to help offset operation costs such as management, cleaning supplies, and to maintain teachers for open lab time. While I’m not expecting a deluge of cash, the mindset should bear fruit over time. In particular this lab may manage to stand up as Afghan owned without a heavily involved international owner. This is consistent with the other fab labs in the world but somewhat unusual for technical organizations in Nangarhar.

Because of extraordinary circumstances (eg, conflict zone), the Jbad lab will not be able to fund some extraordinary operations expenses. For example, the internet connection is super expensive because we’ve had to use a satcon because there isn’t an alternative (there’s no Verizon/AT&T/T-Mobile/Comcast for data). As Afghanistan as a whole makes forward progress these will ease. International support is necessary to equalize the playing field a little until then. Other than those things, our aim is for the lab to fund its own operations and projects, in the process busting the technical skills / technical jobs logjam in the eastern province. That’s why the two projects we kick off in January are so important. 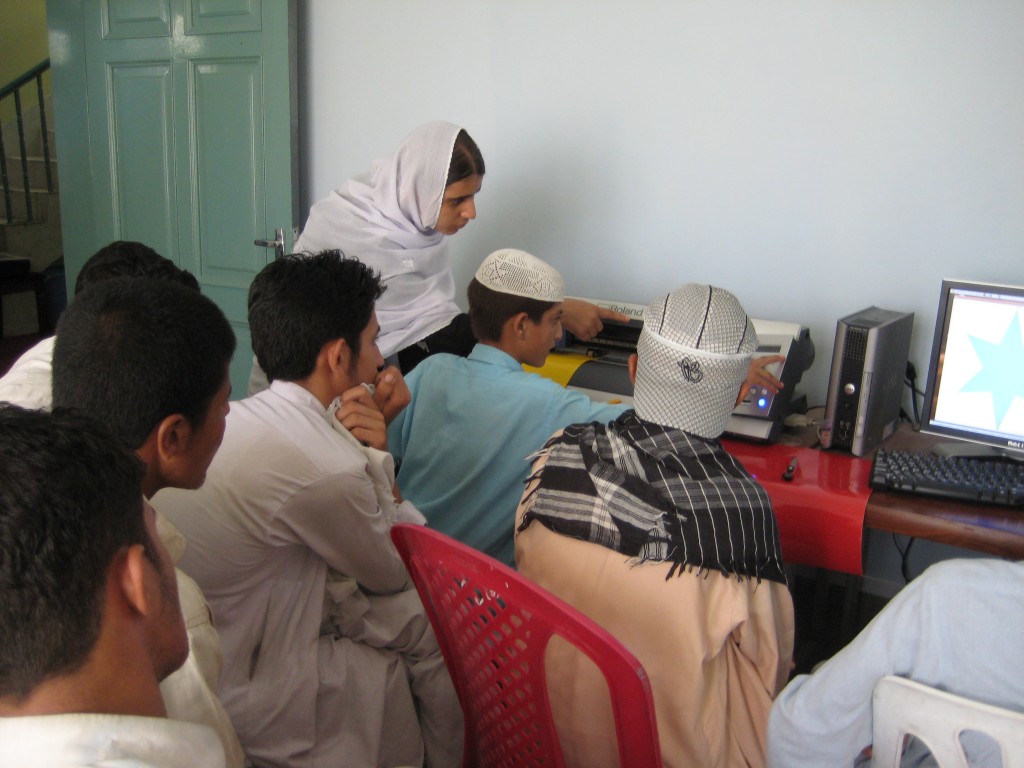 As to interim funding for the lab, many of my cohorts are helping to pull together a web and online community funding drive to seed the lab startup. We’ve even accidentally made $90 before going live with the site! (See http://www.fablab.af/). I plan to visit again with the local PRT, GO, and NGO organizations to find out about their funding and procurements processes – I envision funding not to pay the expenses outright but as customers of projects. Surely the PRT would like some wooden signs that say Chow Hall – 500 m straight ahead for like $500, right? I can think of a number of things that I would like to have the users make for a customer and maybe the PRT can think of some that they would really like to have too.

I’m told that pretty much all internationals that visit Nangarhar are taken to the fablab when their schedules and transpo permit. Construction, security, doctors/subject matter experts, business people, journalists, and other grad students alike. They always report that they are surprised to find that no matter what day they arrive unannounced there are indeed swarms of users wholly engaged in learning something and doing something that they don’t expect those people to be working with. I’ve been having a lot of difficulty with the particular brand of multipoint videoconference system at Jbad (something to do with the MCU and/or the network connection) so we haven’t been able to get maximal people to see into the lab. You can peek in at any time of the day on the other labs (username “guest”, no password, if asked). As they become more net-savy and are connected to the world, what’s particularly neat is that we’re starting to see and hear real voices from real, regular Afghans. (One of the ways you can help is engaging these early users in conversation – leave comments on their posts and uploads!)

That’s probably the area that needs the most help as with everywhere in country, comms and power are at the top of my worries. The comms connection is great when it’s up, but it’s not always up especially as the experimental balloon continues to degrade. Our Mindtel collaborator work their butts off every several months to keep the support of the comms sponsor for just a little while longer. We have a great generator for power but can’t run it 24/7. We’re out of capital money to get either a battery system or second generator, and we can’t really afford the diesel anyway. It feels like I am asked for money for a new fuel filter every week. Most of all, the wiring to and within the fablab is a nightmare and I’ve already lost (expensive) equipment due to dirty power. Each day in the lab requires several hours of troubleshooting which generally turns out to be a problem with under/over powering or similar. It would cost on the order of $6k to rewire the lab, money we don’t have, so for the moment we make do.

Secondary things that would be nice to get some help on are the practical matters of food, water, transpo, for the younger users that come to our lab. Some don’t get clean water or real meals anywhere. I would like to get to a point where we can provide something like fortified biscuits and the like for the sessions with younger children. They are usually the population that are very very quick to learn things and it’s the best time for them to be learning more stuff. But perpetual and crippling hunger, malnutrition, and dehydration work against paying attention to anything much less brain development. I can see big problems with hand-eye coordination and muscle control with the village kids. I’m a technical person and definitely not in a position to know anything about this kind of help so help from organizations that would be willing to collaborate would be quite ideal. Additionally, the local public schools aren’t teaching English, computers, etc. The fablab could be a place to facilitate and foster this but I and my cohorts are basically limited to technical topics. Both of these vectors are quite long term and in the vein of long term idealistic vision. 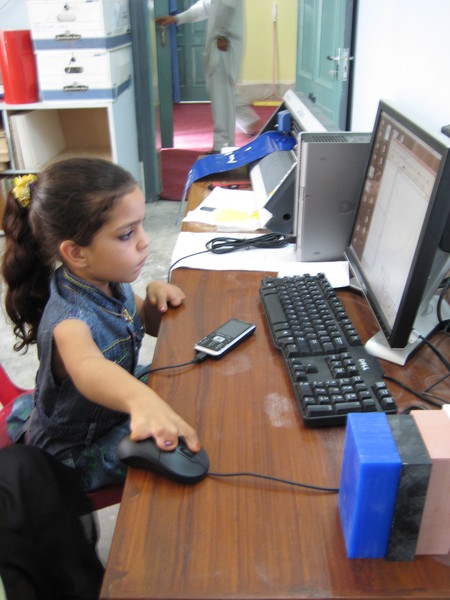 I realize it’s a little strange to be giving an update on something that some of the readers have heard nothing about. You can find a short history of the Jalalabad Fab Lab, more on Fab Labs in general, and lots and lots more about what’s going on at a few of the labs from my fab blog and others’ blogs linked from that site. We don’t think that fab labs alone are the solution to all of Afghanistan’s problems but I’m aiming to show that after the Marines clean out an area and make it reasonably sane for people to come out of their houses, part of the future requires local Afghan nationals (regular people) to have access to the tools to help themselves (rather than waiting for internationals or Afghan government to provide them with everything). So far, I have one shiny example of this in the township of Soshanguve, South Africa where a group of unemployed youth have transformed where they live from a dead end to a nearly self-contained thriving place where people can have a future without leaving. The Christian Science Monitor went to see for themselves in 2006 when the lab was still somewhat new – it’s really more and more amazing now three years later. But that’s another story.

We’re about a month away now from getting on the ground and kicking off the two big projects described above. I welcome any and all comments, thoughts, and help.