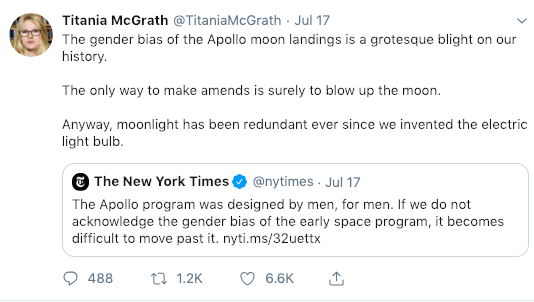 I was finishing up a post for the Freq about riot control and migrants when I suddenly discovered I was being oppressed, endnote just a little, but on all four recognized levels of oppression. This insight jumped out at me when I went looking for information on a topic I know something about. When I first saw it I didn’t think much of it but after spending hours on additional research and days thinking it through I decided it was time to write a post, an important one, free of F bombs (to show I’m serious)  in hopes of restoring a sense of calm. Calm is good when dealing with “isms”.

Let me set this up; the discussion was about the requirement to use overwhelming force to remove leaders, agitators and natural fighters from a rioting mob. I was writing about the Marine Corps experience with Haitian and Cuban asylum seekers in the early 90’s. The post on that topic can be found here on The Freq website that I contribute to weekly.

As I was describing how the SNCO’s managed their snatch teams I mentioned the “rule of opposites”, a term first coined by Gavin Debecker, in his world famous (should be mandatory reading) book The Gift of Fear.

The rule of oppisates is mentioned frequently in law enforcement and shooting publications, I searched FRI for that term and four articles with that phrase pop up.  I went to goggle to get a hyper link and guess what I found? 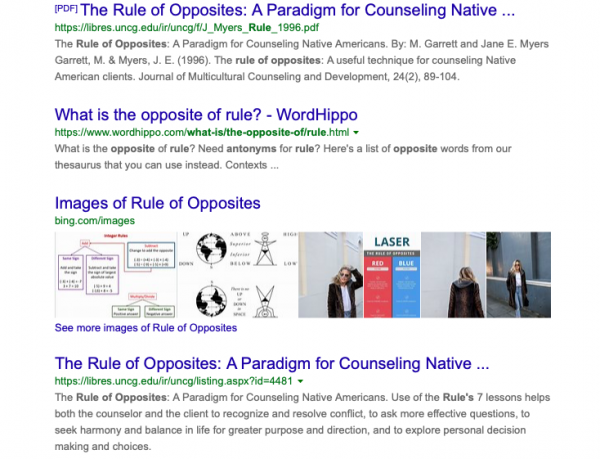 What are the chances there are more people looking for Native American counseling paradigms then the definition of the most common heuristic used in the law enforcement and firearms training industry? They are zero, the results from that phrase are being manipulated to present material considered, by the companies running the search engines,  more acceptable.

That has little impact on news consumers like myself who know what they are looking for. But what is the impact, over time, of this kind of deliberate manipulation of search engine results?

Keep in mind references to the “rule of opposites” in law enforcement journals appear just after the examples in the screen shot above. I’m not trafficking in conspiracy theories,  just pointing out an inconvenient fact when it comes to search engines.

I can promise you one thing about search engine manipulation; it will not work as planned and the unintended consequences could be significant. They always are when you launch a cleaver plan inside a complex system in the belief everything will work out exactly as you  think they will.

As I was milling this over while procrastinating (i.e. looking at facebook) I saw a post about Global Warming by my FB buddy and fellow IMOA Frank Gallagher; look what was inserted below it: 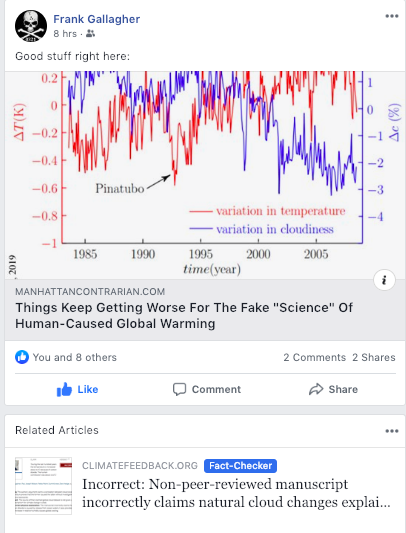 I challenge anyone to go through that cimatefeedback.org rebuttal and find one citation that backs the claims they are making in their report. It is difficult to decipher their academic speak, but I can sum up their point. It is an argument from authority and the authorities say that climate change is real therefore skepticism is wrong.

The author of Manhattan Contrarian, Francis Menton, is a partner in the Litigation Department and Co-Chair of the Business Litigation Practice Group of Willkie Farr & Gallagher LLP in New York.  Mr. Menton specializes in complex and technical commercial litigation, and has a nationwide trial practice. Mr. Menton is not a climate scientist, he is a demonstrably competent man with a passion for analytics coupled with a refusal to be bullied by “experts”. That is a very American trait which is interesting because what is, or is not, an “American trait” is now a point of bitter partisan debate.

I don’t care what you believe about climate change. I find the argument from authority approach suspect after living through global cooling, the population bomb, the “running out of food” scare,  the  “you can’t drill your way out of energy dependence” fraud, AIDs, bird flu, acid rain, alar on apples, etc… All of these emerging global emergencies proved to be wrong; and not a little wrong; completely wrong.

This is why I self identify as a “public defense intellectual” during my weekly gig on All Marine Radio with my fellow expert Jeff Kenney. It’s an ironic dig at the pretensions of self identification validated through ‘lived experiences’. Mac, Jeff, and I aren’t experts on American foreign policy, we are victims of it, which is why our weekly podcast is so popular.

In a perfect trifecta of outrage I then stumbled upon the new trailer for Top Gun II. I even wrote an intemperate comment a friends FB page about the trailer I was so pissed, but it took me hours to figure out why. And it is not just this: 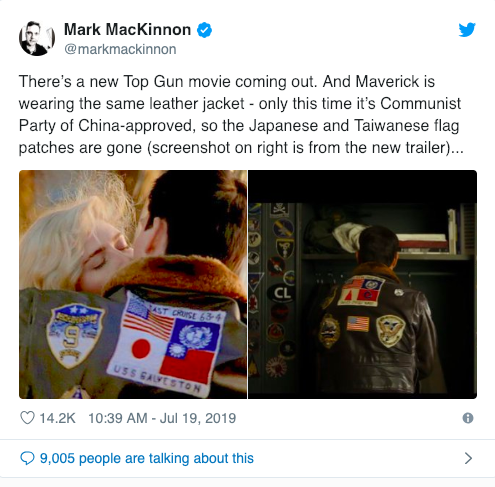 It’s the premise of the movie that I found so offensive. Cruise is a 30-year Maverick who refused promotion like the other corporate shills and stayed in the cockpit. He routinely flies along the southwestern desert mere feet off the deck and keeps his cat like reflexes sharp with some sort of vertical ascent high speed, low drag move used to inverted over a Mig. The admirals admonish him saying he should be in command like them, not bumming around navy fighter squadrons for 30 years, but Cruise knows better, he’s a singleton with his own creed. In the end he’ll show them all that he, the anti social, non-conformist, was right all along and is the true hero.

We have long known that China dictates to Hollywood what is and is not acceptable for new releases and Hollywood always complies. It does not work the other way around. The newest Chinese hit, Wolf Warrior II, pits elite Chinese Special Operators in Africa battling former US Marines turned corporate mercenaries for some international evil corporation that I assume is not Goggle. 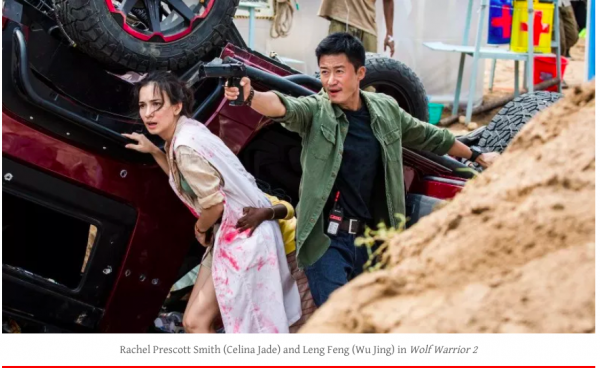 Top Gun II is not a movie about naval aviators or naval aviation, it’s not about the American military – non conformists don’t last there and “mavericks” fly desks, not aircraft in the American armed forces. It’s not about traditional American military virtue or an accurate reflection of the military culture. It seems the Top Gun movie is about Tom Cruise and making big bucks off nostalgia for another re-boot.

The character in the Tom Cruise movie is an anti-American he is used to show that our traditional values, mores, and systems are corrupt. Read this description of Wolf Warrior 2 from the National Review article linked above:

“In Wolf II, China is the only powerful, responsible, and benevolent world power. Chinese workers help Africans build their economy. Chinese doctors work to discover a cure for a deadly endemic. And the film unabashedly takes several swipes at the U.S. When African and Chinese civilians inside a factory are under attack by rebels and mercenaries, the only good American in the movie, Rachel Smith, a Chinese-American volunteer, fanatically tries to contact the U.S. embassy for help. Leng asks her, “Why are you calling the Americans? Where are they? It is a waste of time.” After she tells him that she tried to reach American government by Twitter, Leng responds that “the Americans are good for nothing.”

Why do I care that Hollywood movies bash America just like Chinese movies?

That was a list of objectives from Department V of the old Soviet KGB as distilled by the blogger esr on the Armed and Dangerous  blog. He goes on to note:

As I previously observed, if you trace any of these back far enough, you’ll find a Stalinist intellectual at the bottom. (The last two items on the list, for example, came to us courtesy of Frantz Fanon. The fourth item is the Baran-Wallerstein “world system” thesis.) Most were staples of Soviet propaganda at the same time they were being promoted by “progressives” (read: Marxists and the dupes of Marxists) within the Western intelligentsia

esr and the (actual) intellectuals he references in his writings may be spot on or they may be wrong. It does not matter how that list of propositions got here; it has been here, for decades.

What I know is that 50 years ago, on this very day, when I stayed up all day and night with my family to watch Apollo 11 land on the moon; the ideas listed above would have seemed alien, absurd, and repulsive to most people — at best, the beliefs of a nutty left-wing fringe, and at worst instruments of deliberate subversion intended to destroy the American way of life.

Joel Kotkin, in his post Age of Amniessia at Quillette, describes the consequences of progressive policies as they are manifesting today:

Liberals like Cass Sunstein suggest that students raised in an atmosphere of homogeneity “are less likely to get a good education, and faculty members are likely to learn less from one another, if there is a prevailing political orthodoxy.” Yet too few university administrators counter these trends. One college President in Canada, for example, justified efforts to tamp down on “free speech” by arguing that doing so created “better speech.” At many schools, professors are now asked to sign “diversity” pledges that eerily reprise the kind of “loyalty” pledges common during the darkest days of the Cold War. This passion for thought control extends even to comments such as “America is the land of  opportunity” or professing to believe in a colorblind society, views which can now be categorized as punishable “microagressions.”

This ideological rigidity has shaped a generation of progressive activists who also now represent the best educated, whitest,and most politically intolerant portion of the American polity. A common tendency among progressives is to designate certain conversations as “hate speech,” an approach to free speech recently endorsed by the California Democratic Party.

That doesn’t sound like trends that bode well for a free peoples. My considered opinion on the topic , and I am a self identified defense intellectual, is that the progressive experiment is creating an enormous backlash that will sweep it into the dust bin of history.

It will not happen soon, there are potential large setbacks that could derail progress against progressives. I am confident that a major political change is at least six years away but Trump could lose in 2020. If he does the promises being made by the current field of democrat candidates will spell doom for their party if attempted. My post at the Freq talks about the last time they did that (Clinton’s first inauguration) and the consequences that followed. Consequences the press did not report on extensively and that are hard to find in search engines today. But the consequences were real and we now have an internet full of reliable sources who are not connected with the media or government. The next time around burying the story will not work.

Change is coming because the one thing you can take to the bank is our political system is functioning on borrowed time in its current configuration. Reality is going to introduce this change, let us hope the lesson it inflicts is not too painful.

One Reply to “We Are Being Oppressed”