There are many names used in Afghanistan to describe the groups hostile to the central government. Taliban, insurgents, Anti Government Elements (AGE) and Armed Opposition Groups (AOG) are the most common descriptors. AOG can be Taliban, criminal gangs who cooperate with the Taliban, rent-a-Taliban (mostly teenage boys who need money and want adventure) or militias controlled by warlords. Every armed group has its own agenda and few cooperate with each other. This is their principal weakness -the inability to operate with unity of command or purpose. Our big weakness is that we cannot take advantage of their weakness because most (not all) of our military is confined to large bases and most (not all) have a limited understanding of tribal dynamics in their areas of operation.

We were asked by a journalist if we could set up an interview for a story he’s working on. Here he is talking with the village Malik from Spur Kunday and an AOG fighter up in the hills above Surobi. 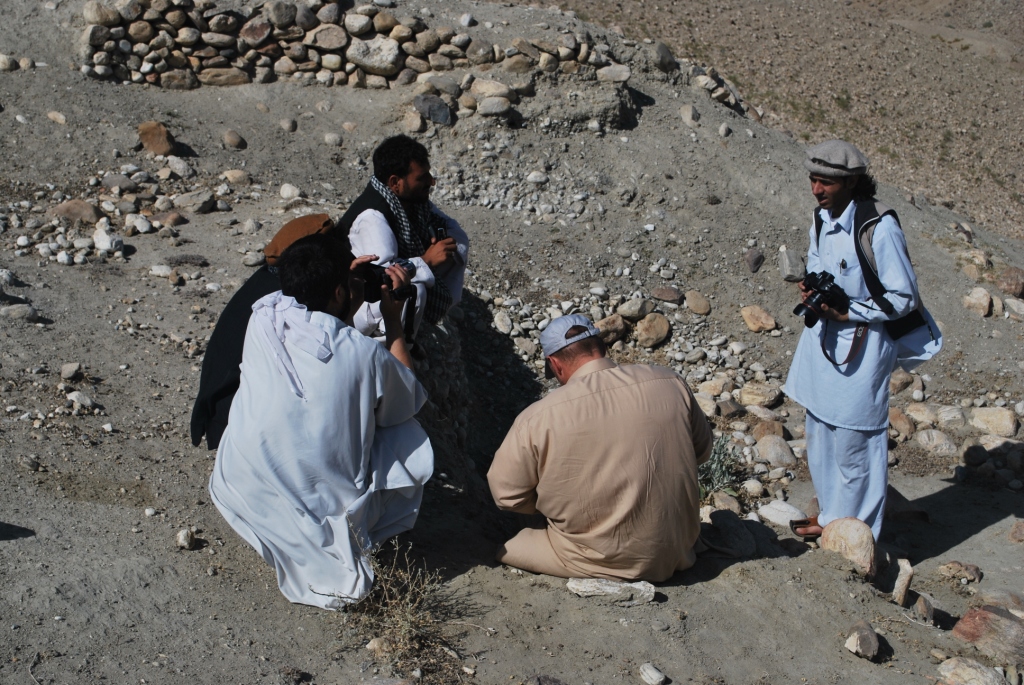 It is not comfortable for us being out in the open like this. We are at the mouth of the Uzbin valley up in the foothills just off the dirt track which is the only road in the area. The valley has seen much fighting since the French ambush last month. The chances of a predator or some other American surveillance platform zooming in on us to determine friend or foe status is high. We are certain that the American ROE would prohibit attacking us as long as they do not see weapons. But who wants to chance that? Not us which is why we tried to hurry the interview along as best we could.

Shem and I left the weapons and body armor in our vehicle and pulled security for the hour or so it took to conduct the interview. It is a strange situation to be in – we could not put a US flag or an air panel on our roof because we know there are bad guys in the hills above us. We also could not walk around with our rifles which would offer protection from local AOG but open the door for a visit from Mr. Predator.

Friday morning we got organized and set off for our interview – here is a shot of us getting jocked up in the local garb. Shawal Kameez, pakol hat, scarf and vest over the body armor. On the road we take off the sunglasses because Afghans don’t wear them. We do not fool any locals who get a good look at us as we scream by in our vehicle but that is not the point. The point is to be inside the OODA loop of anyone looking to cause mischief. If a bad guy wants to ambush internationals on the Jalalabad – Kabul road he has to Observe the target, Orient his weapon systems on the target, Decided to attack and then Attack the target. Observe Orient Decide Act (OODA.) That loop takes much longer then most people realize because most people received their tactical combat training via Hollywood movies. In the real world understanding the OODA loop theory and how to apply it is the fundamental building block upon which an accurate threat assessment is made. Unless AOG spotters have identified us and radioed ahead to an ambush team (something we have never seen on the Jbad road to date) it would require superhuman decision making ability to ID us and decide to attack us as we scream by in a vehicle that looks just like every other local SUV on the road.